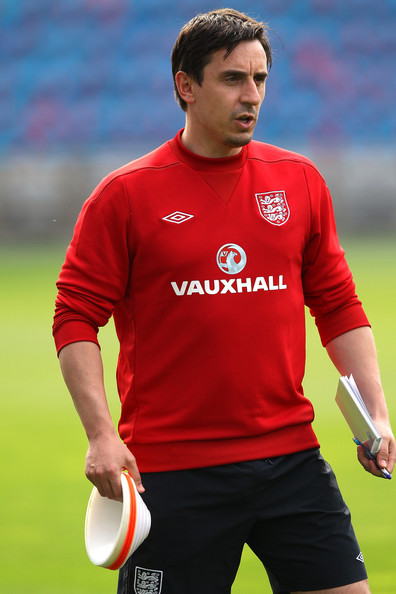 Gary Neville has admitted he finds it difficult to control his emotions in his new role as coach with England. The national team topped Group D during the week and face Italy in the quarter-finals of the European Championship.

After spending the entire season working as a pundit for Sky Sports, the former Manchester United right back found himself working alongside manager Roy Hodgson at Euro 2012 after getting the call at the end of the season. Whist I don’t agree with a lot of what the England national team do, I felt this was a good opportunity for Neville to get some experience under his belt because it’s likely that we’ll see him attempt management in the future.

“I was quite passionate on the pitch, but on the bench, I can’t control myself,” Neville told FATV. “It’s good to have someone calming next to me, because I’m bobbing up and down like a cork really.”

Neville has been impressed with Hodgson’s attitude and believes the players are all rallying behind him. Secretly, though, I doubt Gary was happy about the way Roy handled the Terry incident, making an absolute joke out of Ferdinand and failing to stand up to racism.

He added: “(He) is calm, doesn’t get carried away by things, brings a great deal of humility, trusts in his players and has faith in them and I think they are recognising that he is someone they like and want to play for. I think that’s important and one thing about the group in this last three, four weeks, the work rate, the endeavour, the effort has been absolutely incredible. Even for me having played with quite a few of them, to see it from the other side is inspiring really.”