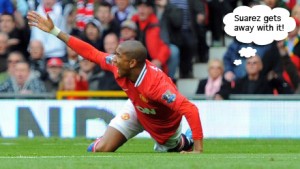 Manchester United winger Ashley Young was branded a diver on more than one occasion last season after winning penalties against Queens Park Rangers and Aston Villa but he has come out while on international duty and insisted he isn’t a cheat.

The reaction picked up real momentum and Ferguson had no other choice but to have a word with Young about his actions before the season came to an end. I felt embarrassed to say the least watching his dives in both games and I do believe they were forms of cheating. However Ferguson has always been good with young players, so I’m sure he was only trying to lead Ashley in the right direction.

Young said: “At the end of the day, the referees came to the decisions they did. I’m not a cheat. I’m not a diver. I won the penalties. The matter’s been left now.”

Young also claimed the abuse he received from English football fans had not affected him one bit as he prepared for the European Championship campaign. By the way, they are the same supporters that expect him to step up to the plate now that Wayne Rooney is suspended until the final group stage game.

“I am feeling confident on the back of a few goals and assists,” Young said. “There has been a lot talked about what I have to do in that role just off the striker. A lot of emphasis has been put on me. I thrive on the pressure. I enjoy it. It is an opportunity to run at defenders. That is what I am there to do. There is no better feeling when I do that.”

When it comes to racism at Euro 2012, Young says the best way to deal with it is by making the abusers pay on the pitch. There is a fear that black players will be targeted throughout the competition and England kick off their Group D campaign against France tomorrow night.

Aged 26, Ashley Young believes it is UEFA’s ­responsibility to deal with racism at the tournament, but revealed he learned how to respond to abusers when he was just 11 years old.

“When I was younger, actually. I was 11 years old and was racially abused on the pitch. It was obviously disappointing to hear it at such a young age. You don’t expect to hear it at any age, but when you’re a youngster even more so, you don’t expect to hear it. I turned around, got on with the game and managed to score two goals. It’s one of those things you don’t want to hear. That was by another player. I’m not too sure what happened to him. It was when I was a youngster. I’m sure the matter was taken up by the managers. It was a Sunday game. It shouldn’t be in football, ­especially nowadays. I’m sure UEFA are going to clamp down on it.”

When asked about the abused he picked up in September last year during a Euro 2012 qualifier against Bulgaria in Sofia, Young replied: “It didn’t affect me. I can’t speak for other players. I had to block it out in that game and get on with it. In that game, it was disappointing. Hopefully, it doesn’t happen in this tournament. UEFA dealt with it after the game.

“Like I say, it’s one of those things I had to block out in that Bulgaria game. The FA and UEFA took the matter into their hands. UEFA dealt with it and Bulgaria got fined. The fines are not up to me, it’s down to UEFA and how they deal with it. That’s all I can say about it. It’s one of those things we shouldn’t be sat here talking about it in this day and age. It shouldn’t happen, but it does happen. UEFA have taken it into their hands and said they’ll deal with the matter. Hopefully, we won’t hear it happening in this tournament.”