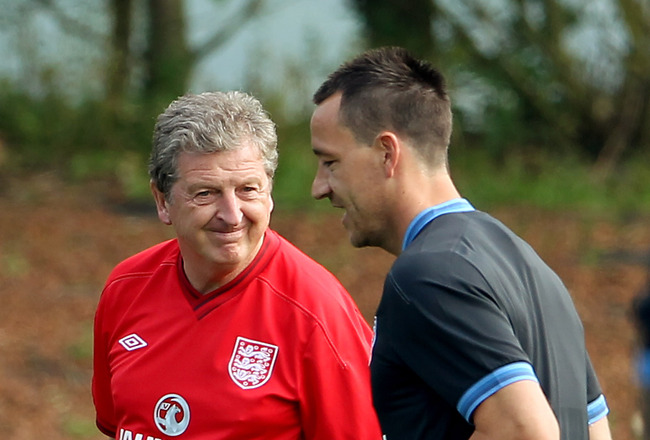 Just under 48 hours before England play their first match of Euro 2012 against France, Roy Hodgson spoke with ITV and made an attempt to give an explanation for leaving Rio Ferdinand out of his squad.

The former Liverpool manager claimed he had overlooked Ferdinand because it wouldn’t have been right having him in the squad and not the starting eleven.

“Rio Ferdinand for me is not a player that you call up as a substitute, or to cover for the players that you have,” the England manager said following Holland’s defeat to Denmark. “We turned to Martin Kelly because I knew he was going to be someone who would be very useful to us. He’s very happy to be here knowing that his chances of playing a big part in the tournament are quite small. You don’t turn to people like Rio Ferdinand for that.”

So basically, Roy Hodgson is still going on about the “footballing reasons” which apparently forced the decision to leave Ferdinand out of his first squad as England manager. Everybody knows this isn’t the truth, so I wonder why he feels the need to come on television and pretend there were other reasons.

Terry hasn’t been found guilty of racially abusing Anton Ferdinand, so nobody expected Hodgson to come out and speak the truth. But there was little point coming out and telling porkies in attempt to explain why Rio had been snubbed. The FA didn’t handled this situation well and are probably worrying about it effecting England’s run in the European Championship.

As for Martin Kelly, who Hodgson turned to when Gary Cahill went home injured, I find it laughable how he edged his way into the frame. Not to mention ahead of Rio Ferdinand because, sarcastically, that’s almost a criminal offense. That ridiculous move was made by a man full of guilt, feeling like he owed Liverpool something.