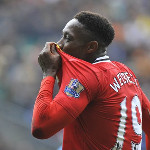 It is a stellar sign of Sir Alex Ferguson’s judgement of player potential and development when he predicted in 2009 that a young, unproven local lad from Longsight would gatecrash Fabio Capello’s World Cup squad of 2010. The man in question was struggling to make the cut at United, his talent evident but question marks surrounding his growth and physical development were lingering over the progression of Danny Welbeck. At the time of interview, he was playing his trade for the manager’s son at Preston North End. I would be lying if I said I didn’t have my reservations at this point too, during the 2009/10 campaign Welbeck looked like a rabbit in front of headlights and a little starstruck playing alongside Rooney, Berbatov, Giggs, Scholes.

Nobody apart from insiders at United and Fergie himself had the boldness to predict this almost meteoric rise, Welbeck is now a fans’ favourite and upon writing (a week before England commence their Euro 2012 campaign against the French) Welbeck looks certain to lead the line for his country after he broke his duck against Belgium at the weekend. What a difference a couple of years can make, Danny has gone from a scrawny lad to a physically imposing centre-forward with some frightening attributes.

In truth, we cannot look beyond the help of an Ex-Red who has helped transform Welbeck and set him on the right path to realising his bundles of potential. When Steve Bruce made the call to Sir Alex regarding the availability of squad players, SAF was more than happy to do his old centre-back a favour. It was agreed generally that the move was beneficial for both parties. Bruce believes the arrangement was mutually beneficially to both clubs.

“We enjoyed having Danny,” Bruce told the club’s official website. “He was as good as any young striker and a real privilege to work with, especially at such a young age. He came on well after a slow start and enjoyed having the perfect platform to play regular football. Danny was absolutely terrific and we thank him for that. He did great for us and Sunderland was fantastic for him.”

To highlight the enormity of Welbeck’s prominence, he revealed he was allocated his first Manchester United locker next to the daunting figure of Cristiano Ronaldo, ”You’re thinking: ‘Am I a bit too much in his space?” Welbeck is United through and through, made even sweeter by the fact City rejected him as a kid. Recollecting his first goal on debut nine days before his 18th birthday against Stoke in a 5-0 romp in front of the Stretford End, Welbeck says, “it was just subconscious … the shot was sweet, into the top corner. When the ball went in, that feeling … if that feeling was a drug I would be dead!” “I’ve never had that feeling again, not to that extent. It was surreal. I saw my brother Chris in the stand and he was virtually doing cartwheels down the stairs.”

Welbeck, highlighting his modesty, humility and maturity which belies his age, only has positive thoughts about his time on Wearside, “I got back from Sunderland and thought I was more like a man,” the 21-year-old says. “I thought this was my year to step up and show everyone what I could do.” No disrespect to Preston, but Sunderland was indeed the making of Danny Welbeck. He learnt about living away from home, the rigours and demands of Premier League football, and playing in that environment week in, week out.

Seeing Welbeck for the first time since his return from Sunderland was in pre-season. And I thought naturally, he looked a far more physical specimen than the kid who originally started off at United. This development to his game proved he was devoted to the United cause by spending hours in the gym, willing to bulk up to shake off the tag that he looked weak and would get found out by strong, physical defenders. He is now a striker who defenders must dread playing against: not only does he possess searing pace up top but this added physicality means he can also be a ‘battering ram’ for want of a better term, but Welbeck is better than a battering ram, this is why he is a cert for England, it could be argued that strength and aerial prowess is all Andy Carroll has to his game, Welbeck if necessary can play this rugged type of football whilst having an heir of class, which he has developed forging a terrifically promising partnership with Wayne Rooney. The two drew similarities and apt comparisons to the classic Cole-Yorke duo in the Treble season of ’99.

To put shortly, Welbeck has all the necessary attributes required to become a legend at club level, can you honestly see Welbeck in another shirt? No. He has the ability to become a very good player at International level too. Although I think the answer is obvious as to who you would rather see Welbeck producing the goods for. The only feasible ‘weakness’ in his game, is his finishing. Particularly, in the latter stage of the seaon he spurned a few golden chances which maybe a Chicharito or Berbatov wouldn’t have. However, it seems from the outside that he is working very hard on developing this to become the complete striker ( see finish versus Belgium at the weekend as proof of the hard yards being put in). Welbeck might have missed that chance at club level, I remember similar opportunities were wasted by Danny against Villa and Swansea at home, and those goals may have been significant. I am not blaming Welbeck at all, the league was not lost because of this, we all know why the league was lost.

Let’s hope our young forward does score for England this summer and that he embellishes his already burgeoning reputation as one of the most talented young strikers in the country today. He deserves serious recognition just for making the plane to Ukraine and Poland and his potential is frightening. It’s exciting for all United fans to imagine what he can achieve next term after doing so well in his first full season in Sir Alex’s side. The highest compliment that can be paid to Danny is that I always felt we missed his work rate, energy, vibrancy and forward-thinking drive when he was absent from the side (the City debacle away from home being the most prime example of this absence).

2 responses to “The development of Danny Welbeck”