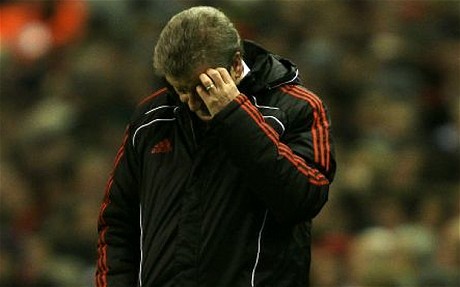 Liverpool finished 37 points behind Manchester United this season. So yesterday’s decision by Roy Hodgson to call up Liverpool’s second choice right back Martin Kelly instead of Rio Ferdinand to replace Gary Cahill after the Chelsea defender suffered a double-fracture of his jaw seems at best bizarre. At worse it runs the risk of turning the England manager into a laughing stock even though he has yet to lose a game. But a couple of losses in the group stages of Euro 2012 and Hodgson will be regarded as having created a rod for his own back.

It should be said that the John Terry alleged racism scandal could have been handled better by the FA. If they deemed him to be an unsuitable captain because of alleged racial abuse they should have suspended him altogether. The halfway house of ‘racist abuse means it’s okay for him to represent his country, but not captain his country’ doesn’t quite work. The FA will point to the fact that Terry has not been proven guilty but that hasn’t stopped them removing the captaincy from him. Moreover when millions of people worldwide have seen the captain utter racist expletives at Anton Ferdinand there really is only one course of action.

Whilst Terry is often acclaimed for his leadership skills, in reality his actions actually show a clear lack of leadership. When one thinks of leaders or captains, the pinnacle of that demonstration is that they are willing to sacrifice themselves for the good of their army or cause or team. One may think of Gandhi, Martin Luther King both who died for their cause. In football one thinks of Terry Butcher or Roy Keane. Conversely John Terry’s consistent behaviour has been one where he sacrifices those around him for himself. His behaviour has now been the singular reason that three members of England staff have lost their jobs – Wayne Bridge, Fabio Capello and now Rio Ferdinand. Any principled leader would have taken a decision to fall on their sword, but Terry seems to believe that he is entitled to behave in any way he likes – whether it is sleeping with teammates’ baby-mothers, or racially abusing teammates’ brothers – he still believes he should be England captain regardless of his position.

Roy Hodgson is an experienced manager. He managed Inter Milan for a season and a half guiding them to 7th place in Serie A in 95-96, and left half-way through 1997 with Inter in 3rd place.  He managed Switzerland – a side that had no flair but were difficult to break down. This is a feature in common with all of Hodgson’s squads – functionally they just about work in the sense that they are difficult to break down, but they lack attacking impetus. He is not known as a winner as such (despite winning the Danish league with Copenhagen), but he has a wealth of experience across Europe.

Which is why the decisions that he has taken are staggering… Having seen Fabio Capello mismanage the whole captaincy process and then lose his job taking the wrong stand over the saga, one would have thought that Roy Hodgson would have taken note of this and learned from those mistakes. Instead Hodgson chose to ‘stick with the people that got us to Euro 2012’. That includes Terry but not Ferdinand. The problem with this is that Capello was sacked for it and team spirit within the camp is not good. The other problem with that is what happens with injuries. Do you do what is right for the team or what is right for just one player?

A few days ago Hodgson was quoted as saying that in Ukraine and Poland he hopes UEFA resolve the racism situation in those countries. Yet before that inside the England camp he had a chance to put his own house in order with his selection. He could pick either Terry or Ferdinand, neither, or both.

To choose both would have sent the message “I’m going to knock both your heads together for the good of the country” and probably would have been a good thing. Everybody would have understood it.

Had he chosen Ferdinand but not Terry the moral line would have been even clearer – “step out of line and you’re not chosen – I don’t care who you are.”

However Hodgson chose the worst possible scenario and then didn’t seem to understand the fuss when he was faced with a barrage of questions ‘I don’t understand why we’re still talking about one man, can’t we move on?’. Journalists were loathe to let him move on. They wanted to understand  why, when Ferdinand had had an excellent season he had been completely overlooked.  Hodgson chose to give the following series of answers over the following 2 weeks:

1. Initially he alleged that this was for footballing reasons, yet Opta stats demonstrate that Ferdinand has outperformed John Terry in just about every department this season.

2. He then claimed that Ferdinand had been playing through injury this season. Yet so has John Terry, Scott Parker, and Danny Welbeck is still carrying an injury. Indeed John Terry’s injury was thought to be very serious at one stage.

3. When both of these reasons were shown to be incongruous he latterly claimed that Ferdinand hadn’t played since 13th May. But even this was untrue since he’d been training regularly and took place in a testimonial for Park Ji-Sung on the 23rd May. Moreover Danny Welbeck and Wayne Rooney had not played for a similar period of time, and John Terry also missed the Champions League Final.

In losing defenders of the quality of Smalling and Cahill there was the opportunity to put right any oversight. Phil Jones might have his future in front of him, but he is no replacement for Rio Ferdinand right now – certainly not at centre back where Sir Alex Ferguson has not trusted him this season. His time at centre back will be in the future if he isn’t transformed into a utility player like John O’Shea. There is no doubt that Ferdinand is still one of the best defenders in the UK despite losing a yard of pace. His passing stats this year are over 90% and this at a time when the main criticism of the England team is that they cannot keep hold of the ball. Ferdinand has always brought calmness to the England side and spread that confidence throughout the team.

In his inability to answer any of the questions posed to him with coherent reasoning, Hodgson has demonstrated that he is unable to identify the criteria by which players are selected.  The public have no idea how Downing – a winger with zero goals and zero assists for Liverpool this season was selected for Euro 2012, so this lack of criteria obviously extends elsewhere. But players need to understand the criteria, principles and the qualities by which they will be judged under by their manager. Many a manager has failed because their players don’t understand them.

A glib look at the selection criteria shows that you must have underperformed for Liverpool this season. Indeed with six Liverpool players in the England set up it is difficult to look past the assertion that what Hodgson trying to do is to prove to Liverpool’s owners that he could have got Liverpool performing well in Europe with that team.

In choosing to overlook Ferdinand, Hodgson is effectively saying that he doesn’t care too much for racism, not for the FA’s “Kick It Out” Campaign – certainly not enough to take a stand over it. He has claimed that Terry hasn’t been found guilty yet, but hiding behind the law does not demonstrate true leadership. He’ll just do what the authorities say. Yet under the glare of the media and top-level competition these statements and decisions will return to haunt him later as they have with previous England managers.

If John Terry is found guilty, Hodgson will not be able to call on him of course and his judgement will come under even more severe scrutiny when he effectively backed Terry despite all the information available to him. This will weigh down on any future decisions he makes. If England lose more than 1 game in the group stages Hodgson won’t be able to use injuries as an excuse as he had ready-made call-ups available – not just in the case of Ferdinand, but also in the cases of Carrick & Richards. All it took was good leadership. Indeed it looks rather like what the FA and Hodgson mean with the “Kick-It-Out” campaign is that the victim should be kicked out rather than the perpetrator. It is not enough that the FA run a scheme like this unless they are willing to stand by their scheme all the way.

To the credit of the FA when they looked at the situation they removed John Terry as captain. The FA should be applauded for that principled stand. They also took a stand against Capello – they sacrificed Capello over principle and that was also the right thing to do. However they should have gone one step further and removed Terry from future selection on the basis that he should be allowed to clear his name with such a toxic charge hanging over him.

In doing so they would have saved Hodgson from this controversy so soon into his honeymoon period. Although Hodgson repeatedly says that he’s had to make difficult decisions, the success of a leader is in getting those decisions correct, not merely in being in the position of having to make them. Apart from John Terry, nobody inside the England camp, the English public, or I doubt even Martin Kelly understands the decision to take Liverpool’s 2nd choice Right Back instead of Ferdinand especially when the team has lost so much experience in Lampard and Barry.

Hodgson has only effectively been in the job for 1 month. He’s had 2 matches and has yet to concede a goal. Yet to move the team from a position that is difficult to break down into a team capable of winning something he will need better man-management skills and better leadership. This will come by setting clear criteria and principles that both players and the public understand.

Yesterday Ferdinand flew out to Cyprus on his holidays. Hodgson might also be reminded that should he continue to get these decisions wrong, he might be taking his 2nd Honeymoon somewhere sunny.

England’s loss is our gain.