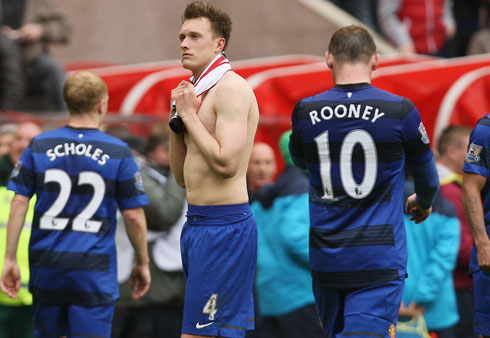 As Manchester City celebrated their first title in 44 years, arguably their zenith moment in the modern era turned sour thanks to a man who Roberto Mancini went on record as saying ‘was finished’ with the club. A day that should have been all about their success over the 9 months of Premier League football, was overshadowed by a sign mocking their arch nemesis Sir Alex Ferguson, which City hastily apologised for.

This blog is not a criticism or a rant about City per se. It is rather an analysis concerning where United can improve and regain their unprecedented hegemony on the Premier League. Their dynasty is under significant threat, due to the limitless nouveaux riches of Sheikh Mansour. People widely-regarded in the game are undecided whether City’s breakthrough title success could oversee a so-called ‘shift in the balance of power’. One thing is certain, Manchester is now undoubtedly the new Capital of football, and it could well be a Manchester one-two for the foreseeable future.

Even weeks before the destination of the Premier League title for 2011-12 was decided, I deliberated with a number of fellow United fans and friends about how we would summarise our season. With valuable experience departed (Van Der Sar, Brown, Neville, O’Shea, and initially Scholes) I considered this season a relative success story, obviously now in hindsight, most fans will say that, ‘how can this year have been a success, trophyless for the first time since 2004?’. My answer would be this: this year has most certainly been a year of transition. Admittedly at the start of the season, there were a lot of unknown quantities and we used this to our advantage. Jones, Smalling, Cleverley were all fantastic in the late Summer but this lack of experience cost us in some games.

My point is, to amass 89 points (unprecedented amount to not win the title) and to only lose out on the title by 8 GOALS, albeit demoralising at the time (I know because I was in the away end as the news from the Etihad filtered through) will stand us in good stead in the seasons to come, regardless of how much City throw at their project. We are trying to build something through youth at United (the proper method for sustainability and success), and this set of players will be better off after the heartache this year.

Not that they will need any extra motivation in the coming years. City are not going to go away. However, we still have the ultimate tactician and motivator, whose desire will be burning as much as ever to wrestle the dominance in Manchester and England away from City. On a personal note, as the news came through to the Stadium of Light of the ongoings, not only the news itself was gut-wrenching, but also were the mimicking celebrations of the home faithful, as the Poznan was in full flow by the time anyone had any time to take in the news. Ferguson stated at the end of year Players’ Awards that the players need to remember this and use it as inspiration to bring glory back next year.

It is also worth mentioning how grave the loss was of our colossus captain, Nemanja Vidic. We surely would have won the league if he had not injured his cruciates in that fateful night in Switzerland. Another thing worth considering is, would City have coped without Kompany for the same duration? Imagine Savic in that side for that long… They’d have been there for the taking, no question. Vidic will be a massive boost next season, as well as Jonny Evans has stepped in he is not Vidic. That is not disservice to Jonny, but Vidic is our Kompany, body on the line, 110% commitment and leader. Bringing out the cliches, but Vidic will have the effect of a new signing next year.

I also feel it is apt to point this out to you all. United, as a lot of critics have stated for a long time now, have not been vintage in comparison to previous Fergie sides. But this lot have managed to take City all the way with their resources. This is arguably City’s best ever side against one of Ferguson’s most difficult challenges. But, for me, the signs are positive, with strengthening in particular areas (obviously midfield), the current crop will be a year older and wiser and will naturally progress to new levels, which are sure to challenge our neighbours for a number of years.

So to briefly sum up, only time will tell if Carlos Tevez’s signing waving antics were too hasty. But with Sir Alex at the helm, and the return of key players and new additions, United will still be a force to be reckoned with.