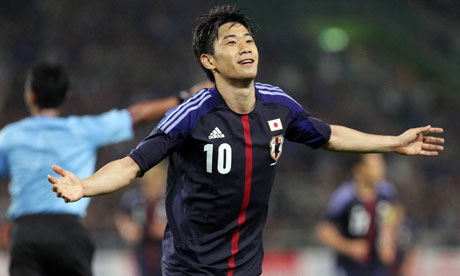 If you had asked the general football fan about Shinji Kagawa two years ago you would probably have been met with a puzzled look. After two seasons filled with both extraordinary agony and tremendous glory, Kagawa finds himself courted by the biggest football club in the world.

The disappointing loss at the final day of the season left United fans looking to the transfer window for salvation. Defeat to Chelsea for the signature of Belgian wonderboy Eden Hazard illustrated “lack of funds” and “no ambitions for next season”. Meanwhile, United seemed to be working hard to tie up the deal for another promising young talent. Perhaps not as flashy and charismatic as Hazard, Shinji Kagawa can quickly prove himself as the saviour of a team that screams out for a little hint of genius.

Kagawa’s talents should no longer be questioned by anyone. He’s quick, leaves defenders for dead, can use both feet, can shoot, can finish, has a great understanding of the game. In many ways, he’s the complete package. His presence in the air is perhaps the only thing you can point to. I suppose that’s the argument used against Lionel Messi too. However, Kagawa’s modest persona makes him a perfect fit at Old Trafford. Having won the Bundesliga twice and the German Cup he was also apart of the Japan team that won the Asian Cup in 2011. A tournament that saw Kagawa sidelined for the final with a broken foot. A crucial injury that threatened to stop him in his tracks didn’t deny Kagawa to impress upon his return to Dortmund. Some would even say that his injury made him even more hungry to succeed once he returned.

Despite his relationship to Japanese adult entertainment star Ameri Ichinose, he seems to be a quiet and shy boy. Whenever interviewed his answers are always thought through and not ridiculed by snarky replies or arrogant grins. The best example of this was on Japanese television when he was asked about the interest from Manchester United. Like a little boy on Christmas Day, his face lit up as he explained that he had spoken with Sir Alex Ferguson who had told him that playing for United would be a huge challenge. He was also asked about Arsenal to which he replied with a boyish little laugh and asked the interviewer to change the subject. He was embarrassed. Obviously not at the interest from Arsenal, but by the attention he was getting. His personality seems a perfect fit at a club that models itself on its history and how the club rose and fell together. Kagawa, who’s also rumoured to be a boyhood Manchester United fan, would know this better than anyone.

The match made in heaven between United and Kagawa solidifies itself with the irritating, yet so endearing term “Glazernomics”. The Japanese market is one of the fastest growing in the world and the attention for football has risen from the ashes following  the 2002 World Cup. Kagawa, much like Chicharito in Mexico, is their national hero. The money United would make in Asia, which is where most United supporters reside, would be astronomical. Just the visualisation of Park and Kagawa teaming up together in ads and commercials would be a wet dream not only for Malcolm Glazer but also for Nike. The importance of having a Japanese superstar at United could also be very profitable for United in the future. Who’s to say the next global phenomenon is not a Japanese kid who wants to emulate his hero? If that hero of his played for United, it would certainly spark the young player’s ambitions to one day aspire at the very same place his hero did. We as Europeans may not realize this to the full extent, but players like Chicharito, Kagawa, Park and Valencia could easily be called “international flagships” for the way they represent their country. They are inspirations for the players of the future. Kagawa would mean a great deal to the footballing future of both United and Japan in that respect.

Many have probably seen the YouTube videos and the read the statistics regarding him, which is nothing short of wonderful. The beautiful thing about Kagawa is his understanding of the game. He seems to know exactly where to move, when to move, when to stay, where there’s space, how to weight his passes. United fans have been longing for a creative genius and here they’ll have him. In a role behind the striker, which would relieve Rooney of his duties and move him further up the pitch, would strike fear in most defences in the world. Just the sheer imagination of Kagawa and Rooney linking up in attack after attack is something we of the present day will be telling our children about. There’s a big time aura surrounding Kagawa and he seems to be the perfect man to fill the void left by creative geniuses before him.

In ancient Japan the samurai was the protector and the servant to those of higher status. Their lives were based upon honour and samurais would gladly die for their master. Raised to live according to the ethic code of bushido, or “the way of the warrior”, the samurai stressed concepts such as loyalty, self discipline and respect. Terms and ideals many Japanese still live by. Hailing from the country where the sun rises in the morning, Kagawa will carry his cultural background and his nations pride on his back, much like the samurai would carry the responsibillity of his master. The Japanese national team is called “Samurai Blue”, but one can be left certain that for Shinji Kagawa, his loyalty will be written in Red.

14 responses to “From the land of the rising sun: Shinji Kagawa”