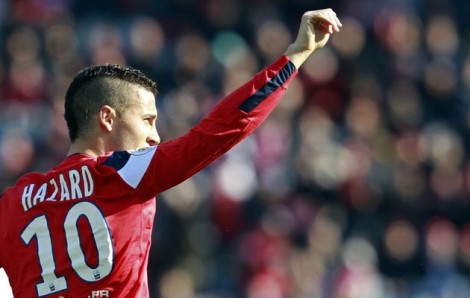 Since Eden Hazard made it clear that he no longer wanted to pursue his career at Lille OSC there has been plenty of rumours circulating about where he would end up this summer. Last week it sounded like Manchester United had edged ahead of City in the race for his signature but quotes from the midfielder himself contradicted them, with Hazard claiming that he hasn’t made a decision yet.

However, the Belgian international has narrowed his future destination ruling all but United, City and Chelsea out of the running. Some sources believe he has agreed terms with all three clubs, therefore, the decision will apparently be made by himself depending on how much money playing time he is promised.

“I do not know when a decision will be made about my future club. It will be between Manchester City, Manchester United and Chelsea. The final choice also depends on how much play that I would get and the position where I play. Not everyone can say that he can choose from these three clubs.”

Hazard’s arrogance has been questioned by many since speculation started. He is another one that fancies himself but is that a problem in football nowadays? Looking at our current squad, I think our midfield needs a bit of arrogance. Football wise, Hazard is too good of a player to not be interested in.

2 responses to “It’s either United, City or Chelsea for Hazard”