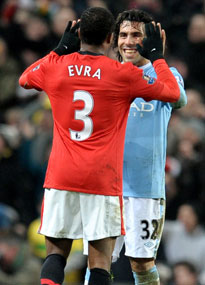 Patrice Evra has spoken out about his former teammate and best friday, Carlos Tevez, for displaying an “R.I.P Fergie” banner during City’s title celebrations.

Less than 24 hours after Tevez’ antics, Manchester City issued an apology to United which was accepted shortly after. The club said their Argentinean forward made a “significant error of judgement” in brandishing the banner. However, Tevez being Tevez opened his big mouth and stood his club up yet again saying: “It seems like Ferguson is the president of England. When he speaks badly about a player, nobody says he has to apologise but when someone comes out with a joke, you have to say sorry. I don’t say sorry.”

Evra, who has been fairly open about keeping a friendly relationship with Tevez since his controversial move to City, has hit out at the 28-year-old while suggesting other United players have lost a significant amount of respect for him.

“I was very surprised by Tevez’s attitude against Sir Alex Ferguson,” he told the Daily Mail. “I’m not sure how the manager feels about it but I’m sure he won’t be impressed.

“It’s disrespectful. Tevez spent two years at this club and was treated extremely well by the manager so I don’t really understand his reaction or the truth about the situation.”

He added: “Tevez is an adult, he plays for another club and is responsible for his own actions.

“It’s a shame because he was always respected at Manchester United and remained in contact with some of the players, but I have no idea what will happen now.”