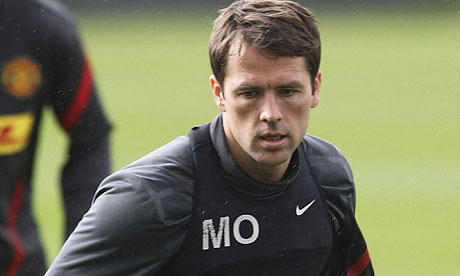 Michael Owen has announced that Manchester United will not be offering him a new contact when his current deal expires this summer. This means his last appearance for the Reds probably came in Harry Gregg’s testimonial against Irish League Select XI in Belfast on Tuesday night.

If Owen didn’t speak out about how he intents to play on and sign for another club I’m sure this news would have led to speculation that he could possibly retire after three injured-ruined years at Old Trafford.

Owen said: “At 32, I definitely owe it to myself to have two or three years and play a bit more – but for somebody else.” I won’t lie. Reading these quotes brought a smile to my face. A number of fans, including myself, saw Owen as a Glazernomic signing in 2009. The fact he got the famous number 7 shirt was a disgrace also.

The former Liverpool striker made just four appearances this season and hasn’t played competitively since November due to a thigh injury, therefore, giving him another contact would have made absolutely no sense whatsoever.

My reaction on Twitter led to a number of fans feeling outraged about how ‘harsh’ I am on Michael but should I really apologise? I’m afraid I couldn’t take to a former Liverpool star that arrived on a free transfer and put more pressure on our medical staff. He was a hopeful failure.

Owen wasn’t brought in to start week-in week-out. Ferguson saw him as a player approaching 30 that was available as a free transfer. He was worth the chance but after three years, Owen has been a proven failure so I think United are right to release him and move on.

Although, Owen certainly has a highlight of his time at United with an injury-time winner in a 4-3 derby victory over Manchester City in his first season at the club. He also scored in the 2010 Carling Cup final over Villa but was unsurprisingly forced off injured later in the game. But apart from those memorable goals and under all circumstances Owen has made little impact at United, appearing and scoring in predominantly second-tier competitions, and low-level opponents.

He said: “I am only 32. I might look a bit older than that but looking at the likes of Scholesy and Giggsy, it doesn’t half fill you with a lot of motivation and confidence. They are playing into their mid-to-late thirties and I still feel as if I am reasonably young. When I wake up my body feels good even though I have had a few injuries.”

When asked whether he would consider playing in the Championship, Owen replied: “I don’t think the Championship would be an option if I am totally honest. I don’t feel I have lost the ability to score goals or play at a high level. I have been playing and training with top players all my life and that was one of the attractions in going to Man United. We will wait to see where that is. If it is not the Premier League then I may look farther afield. I don’t think I will be dropping into the Championship.”

The club thanked Owen for his ‘contribution’ via United’s official website.