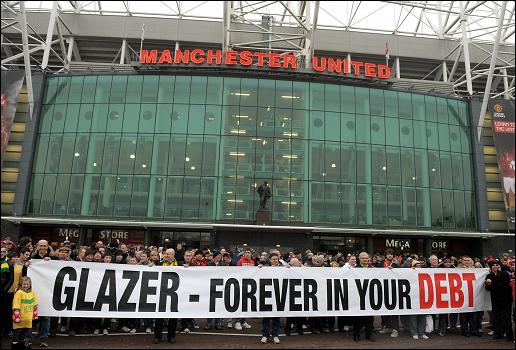 For anyone who’s followed the Glazers reign at the club and United’s financial results over the years, you’ll know some of the shocking figures they have created. Most of what is about to looked at can also be found on Andy Green’s blog.

Total debt has dropped from £484.5 million to £423.3 million. The biggest issue is the Glazers are using the clubs money to do that. That half a billion pound could have instead gone into the team, the stadium and keeping ticket prices down. The positive of the debt dropping also means interest payments are dropping but the amount paid out is still very high. Enough to spend £40 million on a new player per season. £47 million was paid out in March for 9 months for the 2011 accounts but the same period for 2012 it dropped by £5 million to £42 million. As United have bought more of the bonds back, that should drop again for next season.

The IPO which is the sale of shares in the club, most likely in Asia, is another important area people might be interested in. The word is, its still on as United have spent £4 million on bankers fees setting it up but if it goes ahead with the current climate and the high price the Glazers will demand is another story.

The most important area which most people are interested in, is how much United have got to spend this summer and what it could be spent on. The accounts to March showed United only had £25m in the bank account but it also showed £71m had been spent on interest payments and buying back bonds.

I would love to say United will have no money to spend but with television money, sponsorship money and season ticket money being paid in during the summer, that shouldn’t be the case. TV money for second position in the Premier League this season is just over £60 million, season ticket and executive boxes should be in the tens of millions but sponsors like AON will likely only pay in around £10 million from the £80 million deal as £40 million is believed to have been paid upfront. The Champions League and Europa League will likely also be included on top but this will be massively reduced on other seasons due to an early exit.

If a number of players also leave in the summer, which already includes Owen, it does leave space. Key point is that there is a certain number 7 shirt looking for a new owner. The question is, will United spend money on investing in the team or would they again, rather reduce the debt? My guess is the debt will certainly be reduced and I’d look away from the press when they start talking about mega deals. If you want to look at new signings look towards deals the size of Phil Jones or Chris Smalling rather than the £30 million and £40 million stories which will dominate the press.

12 responses to “March financial results: What do they mean for the upcoming transfer market?”