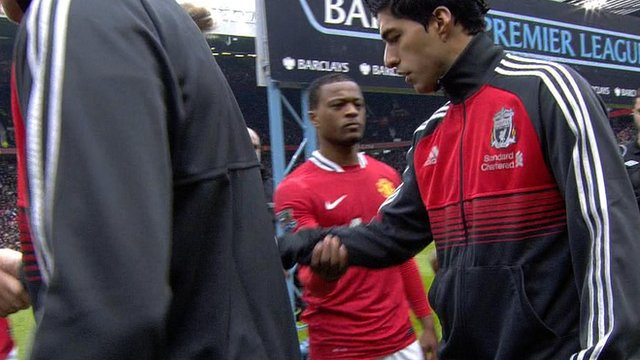 Patrice Evra has described this season as the most difficult of his entire career. The French international also spoke out about the emotions he felt when Luis Suarez snubbed his pre-match handshake at Old Trafford.

Evra kept quiet throughout the entire race row after he first raised allegations of racism against Suarez at Anfield in October. The Liverpool forward was eventually given an eight-match suspension and a £40,000 fine by the Football Association. Unsurprisingly, Liverpool fans felt hard done-by even though a 115 page report was released to explain why he got the ban.

The fact Suarez snubbed the handshake showed everybody what sort of individual he is. Kenny Dalglish, who was sacked by Liverpool earlier today, said the Uruguayan told him before the match that he would shake Evra’s hand but that was a lie. Not only did he lie to his own manager but he snubbed an innocent man’s handshake to make himself look the victim.

“The whole thing was so difficult,” said Evra. “People thought my celebration at the end of the Liverpool game was because Suarez had abused me, but it was more than that. “I wanted say thanks to my team-mates. I know everybody was playing to win for Manchester United, but it was also a little bit for me.

“That game was the most pressure I’ve ever felt in my life – and all to do with shaking his hand. It was very difficult to decide what to do before the game. Many people would never try to shake his hand. But I tried and he refused.

“For me, it was like, “What’s going on?” You see the first tackle, a tackle on Rio Ferdinand? If it was Suarez then I could have had a red card straight away and I’d have been off the pitch.”