Former Northern Ireland and Manchester United goalkeeper Harry Gregg witnessed his very own testimonial at Windsor Park tonight as the Reds traveled to Belfast where they beat the Irish Premier League Select XI 4-1.

Patrice Evra, Wayne Rooney and Ashley Young all got their names on the scoresheet for United with Chris Scannell scoring the only goal for the Irish side.

Hero of the Munich Air Disaster

Harry Gregg was one of the survivors from the Munich Air Disaster and he is relatively unknown for the heroics that he performed on that dark winter night; a date that has become etched in the minds of football fans all over the world.

Gregg was one of Matt Busby’s foundations within the squad he built after the horrific disaster. There wasn’t many goalkeepers like him back then and Paddy Crerand can be quoted “he was ahead of his time.” Busby always had an eye on Gregg even though United already had Ray Wood between the sticks, an established England international. United made Doncaster an offer worth £23,750 in 1957 which Peter Doherty was hesitant to accept.

Matt Busby was already building something special but Harry Gregg added to that. His debut came against Leicester City on the 21st of December and United won 4-0, therefore, he was quick to get his first clean sheet (one of 48 in his United career) out of the way. However, his ability was never doubted. Gregg went on that summer and was voted best goalkeeper at the 1958 World Cup.

‘The hero of the Munich Air Disaster’ was always an outspoken individual that feared very little. On that horrific night in Munich after the plane crashed, Gregg escaped the aircraft and was warned to get out of sight before it blew up. However, he didn’t listen. Instead he pulled some of his teammates from the burning plane including Bobby Charlton, Jackie Blanchflower and Dennis Viollet. Among those he rescued was Vera Lukić, a pregnant wife of a Yugoslav diplomat and her daughter, Vesna, not to forget Sir Matt Busby.

The words “legend” and “hero” and used far too frequently nowadays, but Harry Gregg is the definition of both things. Speaking about his time at United before the testimonial, Gregg said “I left the Hollywood of football when I left United. When you leave the only way is down.” In 1966 Harry signed for Stoke City where he only made two appearances before leaving to manage Shrewsbury Town.

Harry Gregg never liked being in the spotlight and preferred getting his head down, preventing people from scoring goals. I’m not sure whether he enjoyed being the centre of attention tonight but you could still see the emotion on his face when paying respect to United for making the event happen.

One of the stand-out quotes of the night came from Ferguson: “you should not forget players who created history at your club.” It was a fitting night at Windsor Park and everybody enjoyed themselves. Michele Fornasier and Luke Giverin also made their first team debuts in the second half. 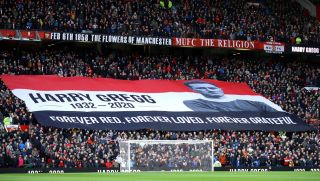