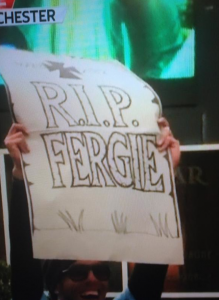 Carlos Tevez has reached new levels of immaturity tonight after holding up a sign which read “R.I.P Fergie” during the Manchester City victory parade.

There is no hiding the fact Manchester United fans hate the Judas cunt but this is nothing short of disgusting. The smile on Tevez’ face shows that the Argentine probably doesn’t see any wrong in what he is doing. This is supposed to be an evening for the City players to enjoy themselves after a hard fought season but no, Carlos who ran away from his club for six months wanted to spoil things, again.

It is likely to overshadow the humbleness City players like Kompany and Hart showed yesterday after full time. Professionals that work hard and respect their club and supporters. If there’s one thing I’ve learned about Carlos Tevez, it’s to expect the unexpected. He has reached new lows and deserves serious punishment.