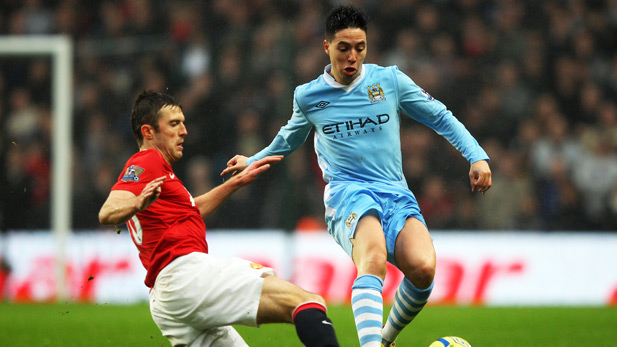 The game we have all been waiting for is just a couple of hours away. Manchester United take a short trip to the Etihad tonight in hope of being a step closer to winning the Barclays Premier League.

A win for Ferguson’s men will put them 6 points clear with two games remaining. However, a defeat to our bitter rivals will put them back on top with their impressive goal difference. But being honest, United are more than capable of walking away tonight with a single point in our back pocket.

Winning the league at the expense of our most bitter of rivals would put the icing the cake. Especially after the devastating 6-1 result at Old Trafford earlier this season, it’s important that we have the last laugh. Losing though, would be insufferable. We’ve seen how giddy they can get and I, for one, have witnessed enough for one season. It’s slightly depressing.

Andre Marriner has been confirmed as referee for tonight’s big game, so it would be silly of us not to fear the worst. The scouse loving fourth official hasn’t caused us many difficulties in the past but many of his calls have benefited Liverpool, who would be gutted seeing us win a 20th league title. From refusing to send Carragher off fouling Owen last man to ignoring Evra’s claims of being racially abused by Suarez, I personally don’t think Marriner can be trusted in a game of such importance.

We will be asking more from our back-four than usual and with Rafael rumored to have been axed from the squad, it makes you wonder if Jones or Smalling will get the nod at right back. Ferguson also confirmed on Thursday that we haven’t suffered new injuries, therefore, it looks like the tabloids got it wrong when saying Jonny Evans would be absent due to a knock he picked up at Everton last weekend.

However, how will we cope with City’s attacking threat which consists of Aguero, Tevez and Silva? Ferguson will probably pack the midfield with five, including Rooney, in hope of gaining more possession. United’s wing play could prove a great amount of importance too. Valencia’s direct style of play will frighten Clichy and hopefully open a gap or two in City’s defence.

There will be fans that say if we slip-up tonight, we don’t deserve to win the title. Although it’s difficult to form an argument against that, you cannot forget about City’s final fixture this season – away to Newcastle. The Magpies suffered a 4-0 defeat to Wigan this weekend but if they want to remain in contention for 4th place, they must beat City. However, I would prefer if it didn’t come down to that.