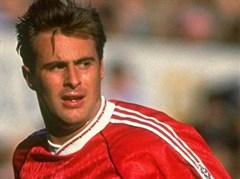 The last United Nights of the season takes place on Saturday 5th May at the Walkabout Bar Manchester – function room. The event kicks off at 7pm and is on the night before we take on Swansea.

Former Manchester United Premier League winning stars Gary Pallister and Clayton Blackmore have been confirmed for the night, so it’s a great opportunity to get down and meet those you cheered on in the past. They will be talking about their time at United and you will be able to get a photo taken plus an autograph.

Music from The Fradsters (Manchester anthems expected) will be playing while supporters get a chance to mingle with Pallister and Blackmore.

The event will be hosted by MUTV’s Mark Sullivan who will be the compere and topic master for the night. The DJ will also be playing United songs throughout the night, which classic match scenes will be shown on big screens.

Highly acclaimed and controversial Manchester artist Michael Brown (Creator of the famous Art of the Game potriat which depictied of Eric Cantona as Jesus Christ) will be showcasing and selling his potraits on the night.

Tickets are now on sale through www.unitednights.co.uk and cost £20 per person. These tickets include admission, buffet, a free raffle and a discount at the bar.

A charity auction in aid of Christies Cancer hospital will also take place on the night, with signed United items up for auction, including a match worn Berbatov shirt from the 2008/09 season.

Dress code is casual (football shirts are allowed) and fans are encouraged to bring their own flags to hang up in the function room.