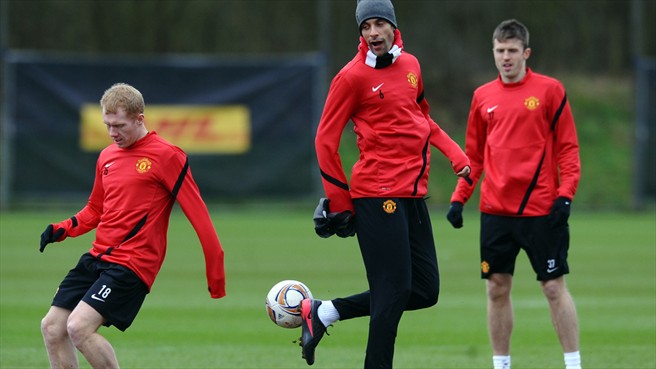 Rio Ferdinand will try to convince Paul Scholes to continue playing football for another season following the incredible influence the 37-year-old has made over the squad since coming out of retirement in January after six months out of the game.

Before Scholes came out of retirement Manchester United were eight points behind their bitter rivals City, so the fact we’re currently three points above them tells you how much of an impact he’s made. Despite making only 18 appearances this season, the ginger genius came third behind Robin van Persie and Wayne Rooney in the Football Writers’ Footballer of the Year poll earlier this week.

Although there has been no talk of the England international retiring again, United are taking their time when it comes to offering Scholes another contract. However, Ferguson insists that they won’t be talking about it until the campaign comes to a close.

Another add-on to Scholes’ influence is the fact that he still hasn’t witnessed a defeat since his return, therefore, Ferdinand has admitted he will do anything to make sure the veteran is part of our squad next season.

“Definitely,” Ferdinand said. “It would be nice if he could play another season, but, with Scholesy, you know it doesn’t make a difference what anybody else says. He’s his own man and he’ll make his own decision. There are a number of reasons why we’ve done well since the turn of the year and there’s no doubt that one of them is Paul Scholes.

“He was out of the game for months and yet he’s come straight back into top-level football and he’s hardly looked out of place. At this stage of his career, that’s phenomenal.”