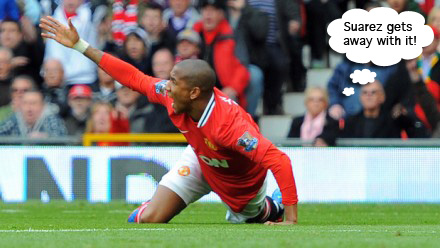 Manchester United manager Sir Alex Ferguson has admitted he recently spoke to Ashley Young about going down too easy in an attempt to persuade the player to wise up and act like a professional.

In recent weeks the England international has left a number of supporters, including myself, embarrassed by his antics on the pitch. And watching Ferguson speaking honestly about it this morning at his press conference showed you cannot make an excuse to back Young up this time around.

Despite having a history of going to ground easy, Young has been criticised more than ever since the 2-0 win over Queens Park Rangers when the United winger went down like a bag of spuds after being put under pressure from Shaun Derry, who not only conceded a penalty for his team but was sent for an early shower also.

Last weekend Young welcomed his former club, Aston Villa, to Old Trafford for the first time since he signed last summer. Right from kick off he looked ready for the occasion, making smart runs and getting himself into tackles. In fact, it was one of Young’s better performances in Red but it has unfortunately been overshadowed by his dive for United’s penalty after just six minutes of play.

“I’m not sure Ashley tried to get the penalty kick but he certainly went down quickly,” Ferguson said. “I’ve had a word with Ashley and he understands where we’re coming from. Hopefully it makes a difference.”

The brilliant fanzine Red Issue have also hit out at Young saying his dive was ‘disgraceful’ and they believe it was a form of ‘cheating’ which it I would agree totally with. The influential editorial went on to quote Busby saying: “If anything is to be gained from football, it is to be gained by winning or losing with dignity.”