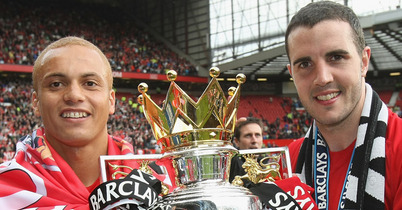 The title is certainly ending up in Manchester this year, but with which club is still yet to be determined, and it could be the old figureheads that ultimately decide the destiny – but it’s not who you think either!

With United’s unexpected slip-up against Wigan Athletic, it has open the door just a crack for their noisy neighbors, City, who pulled within five points of the Reds with their 4-0 win over West Brom, which sets up an interesting five games to go.

Now United control their own destiny, and the Blues can only hope that they do the business against them in a couple of week’s time at the Etihad and somebody else knocks them off.

Most of the readers up until now would have thought that this article was about Ryan Giggs or Paul Scholes. And even though you could write stories upon stories about what the latter still brings to the Reds following him coming out of his premature retirement, it’s not.

Sunderland, who United play on the last matchday of the 2011/12 season, have a squad littered with former players, who probably be caught in two minds if they did end up preventing their old club their 20th league title. Five former Reds – John O’Shea, Wes Brown, Kieran Richardson, Phil Bardsley and Frazier Campbell – are all part of Martin O’Neill’s squad and, even though most of them love United, they will be doing their job as a professional. The former two were intergal parts of the well-oiled United machine that won five Premier League medals each, while the latter has an outside chance of making the Euro 2012 squad with some very decent mid-season performances.

But they aren’t the only team in the North East of England that could decide the destination, either. A week before this game, City has to travel north and take on a very frightening Newcastle United team, so really these two Tyne and Wear clubs will have a real say to what happens two-and-a-half hours south of them.

Hopefully O’Shea will do what Phil Neville – and Brown – has done for United and put the ball through his own net and kick-starts the title celebrations at the Stadium of Light.