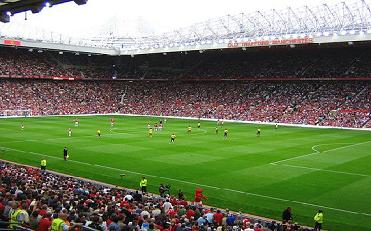 Prior to the Fulham game on Monday, representatives from the various groups behind the Old Trafford singing section met with senior Manchester United Officials Michael Bollingbroke, Phil Townsend and Karl Evans to discuss the Singing Section proposal.

As Manchester United had already decided to relocate away supporters to North Stand Tier 3, a decision made by the club before the singing section proposal was submitted, this has left an empty space within Old Trafford.

Manchester United are very keen for a fans lead initiative to be implemented within Old Trafford and the manager, Sir Alex Ferguson, himself is keen for an improvement in the Old Trafford atmosphere.

Manchester United will trial the movement of away fans to North Tier 3 for the Aston Villa home game, if this trial is successful, then all away supporters will be moved to tier 3 next season, for all games.

Should this move be sanctioned by the local council and authorities after the Aston Villa game, then the current away fans area will be empty for next season.

Manchester United have offered this area for the proposed singing section and as a result, we have accepted this offer.

Andy Mitten, who attended the singing scetion meeting as a representative for the fanzine “United We Stand” has written this excellent article in the Evening News, so we advise all fans to have a read.

The key factor is that those wanting to sit in this area, are there as singers and people applying to sit here should be aware of that.

Supporters will be given the opportunity to relocate into the area and to submit a request to sit with friends, family etc, so that you can be sat together.

This area offers the best acoustics within Old Trafford due to its location and the proximity of the East/South Stand quadrant roof.

What we are now looking for, is a commitment from singers to move to this area next season.Once the area has been officialy confirmed, then we will work with United in order to put an official system in place for season ticket hoders to request a move.

As the area holds 2,698 fans, we are now trying to gage the reaction and estimation of people willing to move here.In order to do that, we ask that you send an email to otsingingsection@hotmail.co.uk stating your name and your current season ticket location (None of this information will be passed to the club until we have approval for the section).