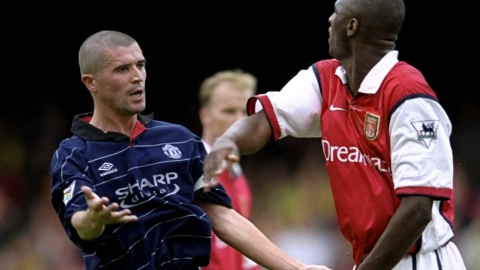 It looks like Patrick Vieira has picked the wrong man to have an argument with, yet again. In Ferguson’s press conference on Thursday morning he warned City’s ‘Football Development Executive’ that he would set Keano on him if he doesn’t learn how to keep his mouth buttoned.

Vieira launched a bizarre attack on United for a number of reasons in the last week. Most recently on his beliefs in regard to referees and their respect to the bigger clubs in world football.

“When United play at home they get some advantage other teams don’t get,” the former Arsenal captain claimed. “I think when you go to United, Madrid, Barcelona, or Milan, when the referees referee these kind of games, it’s always difficult to go against these kind of teams. This is the way it is.”

Although Vieira claims he was misrepresented by Dan Roan, therefore, the club banned the journalist from future media activities. While I understand why a club would ban people from the media for various reasons, there was no need to make a press release. The Frenchman could have easily told Roan that he didn’t want to answer that question. Vieira wouldn’t sound like an idiot if he did.

“He’s more or less saying all the refs have been wrong this season, and you’re not supposed to discuss referees,” said Ferguson. “So he is a paid official, isn’t he? I think he is, isn’t he? Apparently, he’s retracted it. It’s interesting.”

When asked about Vieira’s ignorant comments on Ferguson being “desperate” bringing Paul Scholes out of retirement and back into the first team, the boss laughed and said: “I can bring Keane back if he wants – make it interesting!”

Keano put Vieira in his place a long time ago but I guess it’s true what they say; some people never learn.

6 responses to “Fergie threatens to unleash Keane on Vieira”