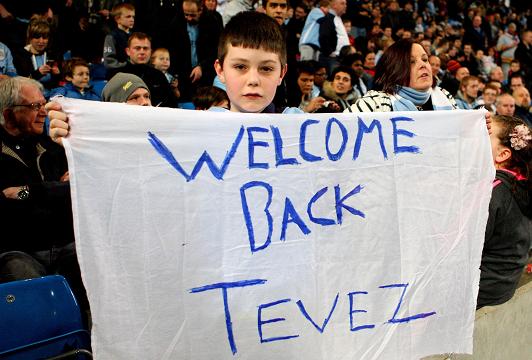 Patrick Vieira told the BBC yesterday that Manchester United and other big clubs benefit from key refereeing decisions at home. Last week, however, he commented on how we must be desperate to bring Paul Scholes out of retirement without thinking about how Manchester City welcomed Carlos Tevez back with open arms after six embarrassing months of being belittled by a greedy Argentine striker.

It’s easy to sit back and talk the talk but can City really walk the walk? When we enter the ‘squeaky bum time’ part of the season, it usually brings the best out in people. Ferguson has dealt with it for 25-years, competing with various managers. The likes of Kevin Keegan (“I would love it”) and Rafa Benitez (“FACHT”) spring to mind when you talk about those that lost the plot right at the end, making the football world chuckle.

The fact that Vieira, City’s ambassador, is playing the mind games shows you something about not only our bitter rivals but their manager, Roberto Mancini. The 47-year-old manager appears to be the type of bloke that doesn’t fancy getting his hands dirty very often and when you come against Fergie with that sort of attitude, there’s only going to be one winner.

When Carlos Tevez allegedly refused to warm up during City’s Champions League group stage clash with Bayern Munich, Reberto Mancini was quoted saying the striker would never play under him again because he couldn’t accept that sort of behavior. However, ahead of their 2-1 victory over Chelsea a few weeks ago, he said Tevez deserves to play. When was the last time you saw a top manager in English football walked on like that?

Whether you think it’s important or not, I’d always prefer a manager that has a bit of bottle about him. Thankfully, that’s been the case at United for a long time now. Right back to the days of Matt Busby.

4 responses to “Mancini has no bottle, so he gets desperate Vieira to play pathetic mind games”