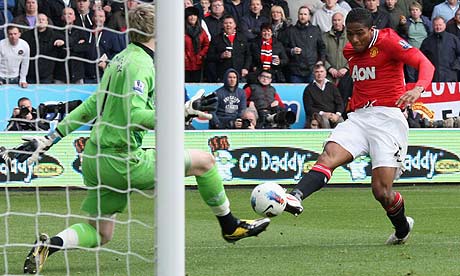 Before the 1-0 victory over Fulham, Antonio Valencia said he notices that there is a lot of pride in Manchester. In fact, it’s always been a city of pride but the title race this season has certainly added to that seen it contains two of the best clubs in English football.

There’s a lot of pride in Manchester that our two clubs are the best in England,” said Valencia. “But now we are focused on Fulham because our challenge is to win all our matches and to arrive with an advantage over City on derby day. I’m not saying whether that game will decide the title but it’s clear the winners will deliver a morale blow to the other club. So I expect a big battle and for us to avenge our 6-1 defeat at Old Trafford.”

Valencia has become one of United’s most important players since signing during the summer of 2009 from Wigan Athletic. Ferguson would agree since he believes the Ecuadorian gives his side a “big chance” of retaining the Premier League title.

However, at the start of the season Valencia didn’t find it easy and the injury he picked up during an international tournament hardly helped. He started a few games at full back and didn’t look the part like he does in a more attack minded position. Seeing him back on the wing is magical, brushing back defenders with strength and speed.