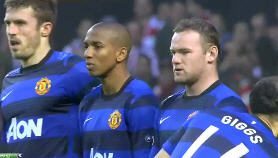 United this evening were outclassed and outplayed by a strong Athletic Club side, meaning, that for this season, United’s European hopes have come to an end. Athletic club were the better side across both legs, winning 5-3 on aggregate.

With the Spaniard’s home record this season, it was never going to be an easy place for us to go to, but interviews with players today showed that they were up for the fight, and confident of a win, but a 23rd minute Fernando Llorente goal saw that confidence slowly fade in tonight’s United side.

Llorente proved a tough act to pin down in the first leg, and showed the same character this evening, firing home a superb volley from the edge of the box, that shot out of reach for 20-year-old David De Gea and under his arm into the bottom left corner of the Reds’ goal.

The deafening support proved vital to the home side, and seemed to lift them throughout the 90 minutes. Bilbao fans had an extremely loud voice on their visit to Old Trafford, so both players and fans travelling to the San Mamés expected thunderous support.

Chance after chance came for the Spaniards, as they were constantly pressing throughout the first half. Their run then continued in the second half, and it came as no surprise that the La Liga side went 2-0 up on the 66th minute mark with an Oscar de Marcos goal, who caught a rebound shot and deflected into the top of De Gea’s goal, completely out of his reach.

United players seemed bewildered by Bilbao’s incessant pressing and constant possession, and struggled to hold onto the ball, or do much with it once we had it. There was solid link up play between Paul Pogba, Ji Sung Park and Tom Cleverley that sparked a glimmer of hope at times for the Reds, but Jon Aurtenetxe broke it up on numerous occasions.

Aurtenetxe was another player for the hosts who held himself well, who at one point sent Andoni Iraola, who was completely unmarked off on a run, who then found Gaizka Toquero inside the box, but his header was sent over the crossbar.

New hope came for the Reds on the 80th minute mark, when Wayne Rooney created his own space and drove the ball into the Athletic Club goal from 25 yards, giving United a flicker of optimism, with 10 minutes to score 2 goals in order to allow the game to go to extra time – if United were going to get through, it was going to be a tough ten minutes, and almost reflect the ’99 final, with clinical finishes required, and fast.

The next ten minutes proved to be the contrary, and Rooney’s goal seemed to do the opposite to the Basque side, and lifted them to defend and hold onto their possession for the remainder of the game.

Now United are out of the Europa League, we can only think positively about the remainder of the season, and see it as more of a blessing, as we can now fully focus on holding onto our top spot in the Premier League.