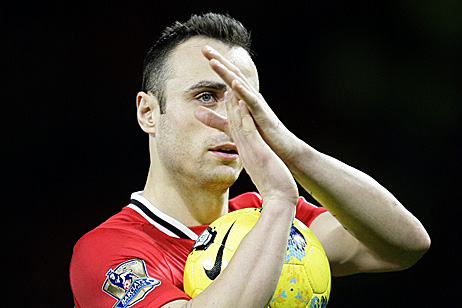 Throughout the years Manchester United have played part in prolonged transfer negations, especially the one which ended up with the signing of Dimitar Berbatov from Tottenham Hotspur for a fee said to be worth £30.75million. But the Bulgarian now finds himself in another tiring experience with questions being asked about a contract extension.

Last season Berbatov received the Golden Boot award after scoring 21 goals in 42 games, with 20 of those scores coming in 32 Premier League appearances. However, there’s still people out there that question his approach to the game but throughout the 2010-11 campaign, Berbatov demonstrated how to play the ‘United way’ which is one of the reasons I can’t seem to get my head around the fact he has been put aside this season.

Is Fergie holding a grudge after the two clear-cut chances Berbatov wasted against City in the FA Cup semi-final last season? If so, I will be disappointed. When the 30-year-old was dropped for the 2010 Champions League final, Berbatov explained afterwards how he watched it in the dressing room with tears rolling down his face. He stayed at the club and fought for a place in the side which sadly, seems ignored.

On Wednesday, Ferguson said: “He wants to get first team football and we need to consider that at the end of the season,” which is fair enough seeing Welbeck has been in terrific form. And with respect for Berbatov, I’d honestly prefer to see him elsewhere if it meant he could go back to enjoying his football. It’s not easy seeing an honest player with such class being put aside like he has been.

Berbatov, by the looks of things, has fallen down the pecking order becoming our 4th choice striker. While I can understand why Rooney and Welbeck start week-in week-out, the Hernandez and Berbatov combination cannot be ignored. For example, the Bulgarian has 7 goals in 10 league appearances this season yet he’s barely been given a look in.

So whatever happens Berbatov this summer, I hope we get to see him play before the season ends. A fitting goodbye for all the moments we shared together, especially that hat-trick against Liverpool.

26 responses to “Berbatov set to leave United this summer?”