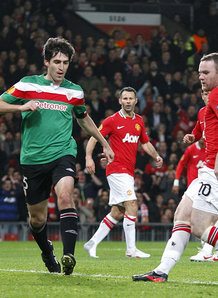 Manchester United were well beaten this evening by an excellent Athletic Bilbao side. But they didn’t help themselves with some very sloppy moments. They now have it all to do if the are to progress to the next round.

Once again the Europa League offered the Old Trafford crowd a lively start to a game. Both sides looked to play on the front foot and attack each other from the whistle. Bilbao’s confidence was high going into to the game having won their previous four matches.

It was United who threatened first when Giggs slipped in Javier Hernandez whos shot was blocked. It was a promising start but it was Bilbao who controlled the first half and looked the most dangerous, with striker Llorente causing United the greatest problems. Far the large part the game was end to end with United producing some good build up play. They were sloppy however, Rooney in particular not looking switched on, giving the ball away too easily and not releasing it early at times when Hernandez’s movement could have let him in.

When the moves did brake down Bilbao counter attacked with pace and numbers. A lack of pressing in the United midfield generally allowed Bilbao to build and come forward with dangerous intent, the United defence had to be on its toes. With Bilbao having the lions share of possession their confidence, already high, was increasing as they put United under more and more pressure. Led by Johnny Evens, who was in excellent form, the defence was holding out. David De Gea was also on his game, reading play well and being alert of the danger. Having had a threat from the outset there were few moments which left United fans with their hearts in their mouths, however.

Given that Bilbao had the greater posession and greater threat, Uniteds own attacking threat was restricted to only a few occasions. So when they took the lead on 22 minutes it was against the run of play. Not that it matters. Giggs picked the ball up halfway into the Bilbao half and forced his way through the Bilbao midfield before putting in Hernandez who turned two defenders allowing hiself space to shoot. He should have finished it himself but his shot was saved, only for Rooney to power home the rebound from 5 yards.

Any thought, however, that the game would now change , United taking control and Bilbao sitting back to sustain any United future threat, was immediately rubbished as Bilbao once again came at United. The pattern of the game did not change in the slightest. Llorente came close with a header from just yards out before Susaeta latched onto a ball over the top before trying to lift the ball over De Gea. Fortunately for United it drifted wide. De Gea was soon forced into making a save low down to his near post.

With the pressure building, it was no surprise when Llorente headed an equaliser a minute before the break after Phil Jones allowed him to trot past him into the box unchallenged.

Not content with an away goal and holding out for a draw, Bilbao flew out the traps in the second half. Relentlessly, they produced wave after wave of attacks for the 1st 10 minutes. United never had a sniff. If not for the excellence of De Gea in the United goal producing 3 brilliant saves the game, and even the tie, could have been over.

With the United midfield being over run the introduction of Michael Carrick settled them a little. It was unfortunate though that he came on for Chris Smalling, whos head wound sustained on England duty had opened up again. Having settled a little, United still struggled to get behind the Bilbao defence and offered little threat. Anderson had also joined 5 minutes after Carrick, but lacking in match practise didn’t find himself overly involved.

Bilbao took the lead via a De Marcos goal in the 72nd minute. No doubting he was offside when he swivelled onto a delightful chip over the United back line, but there was no argument that Bilbao deserved their lead. Once again Bilbao didn’t rest on their laurels and kept looking to attack United and increase their advantage.

With Nani coming on for Giggs, United were patient in their build up play but never really threatened the Bilbao goal with any verve. Hernandez had our best chance when he was found in space just inside the box. However, rather than electing to shoot he chose to try and cut back in on his left foot, presumably looking to bend one into the far corner. It was the wrong decision though as his effort was blocked. A Wayne Rooney shot was the only other really notable effort on goal, his powerful shot moved about a lot but ultimately was straight at the keeper. Other than that, a half hearted penalty appeal was waved away.

In bizzar circumstances Bilbao scored a third. With United building what looked to be one of their more dangerous attacks in the 90th minute, Patrice Evra lost a boot. When Ashley Young played the ball to him, Evra passed to Rooney with his bootless foot. The referee called for an infringement against Evra. It appears that by the letter of the law the referee was correct to call a foul, but it is not something I have ever seen before. The free kick was taken quickly, long up field. There should have been little danger but when Evens and Jones both went up for the headed clearance the ball broke loose. De Marcos got onto the loose ball and fired a rifling shot across goal which was saved brilliantly again by De Gea, who palmed the ball wide and away from goal. That would have been the end of the attack if it wasn’t for Rafael ball watching. He had no awareness that Iker Muniain was running onto the ball and simply ball watched as De Gea, who was alert, rushed to close Muniain down. His efforts were in vain though as Muniain fired high into the United goal. This was a comedy of errors from the United defence. It was very disappointing to see Rafael make a mistake as simple as that as he has been in very good form lately, but he should have been aware of what was going on a he was just a few yards from the parried ball.

A life line was handed to United in the 2nd minute of injury time when they were awarded a penalty, De Marcos handling in the box. Rooney stepped up to emphatically score from the spot. United were now awake and spent the final minute or so on the attack, forcing a couple of corners. With the time against them however an equaliser was too much to ask.

So it was yet another poor and disappointing European performance. Sir Alex Ferguson says he his taking the Europa League seriously, but perhaps not all his players are: with some individuals putting in lack lustre performances. Perhaps Thursday nights on Channel 5 are indeed an unwanted distraction from the biggest prise of all, the Premier League title.

On a night full of negatives, there is one massive positive to finish on. That is the performance once again of of David De Gea. In recent weeks he has been nothing short of world class, and has been vital during Uniteds current run the league. The best part of all is that he is improving game by game. His critics must be devastated.