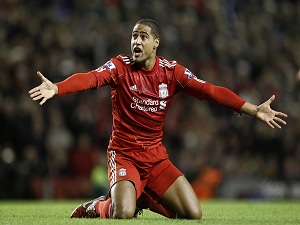 When Liverpool Football Club released three statements apologising for their actions throughout the Suarez and Evra race row, everybody thought we could finally move on and concentrate on the remaining fixtures in the Premier League. Unfortunately, that isn’t the case.

Whether you think those statements were forced by Liverpool’s representatives in America, common sense would tell you that the players and manager were warned about such unacceptable actions.

However Glen Johnson underwent an interview with Ian Ladyman, a Liverpool supporting journalist, yesterday for the Daily Mail. In that interview he blamed Evra for the handshake snub, despite his club issuing three statements 24 hours after the incident apologising to their supporters.

“Evra was clever at Old Trafford,” said Johnson. “Because – I’m not being funny – but if I wanted to shake your hand I would stick it right out in front of me like that. But if my hand is down here, almost by my side, then it’s because I really don’t want to shake your hand.

Luis didn’t shake his hand because Evra’s hand was down there. What else is Luis supposed to do? Would you go to shake someone’s hand if their hand is way down there by their side? Course not. But then, because Luis didn’t do it, Evra has pulled him back by his arm as he walked on, as if to say to everybody: “Look, I wanted to shake his hand and he didn’t…”

He’s following Luis with his eyes as if to say: “Right he’s gone, he’s gone (past me) so I’ll pull him back now…” Evra probably stayed up all night thinking about how to do that. The whole thing was ridiculous.”

Somehow, the interview got even more ridiculous. Johnson spoke about how the issue started when Patrice Evra was racially abused but the England international believes Luis Suarez used the word “negro” repeatedly as a “term of endearment”.

He also replied to what Paul McGrath had to say about the infamous t-shirts Liverpool players warmed up in to show their support for Suarez, who was later given an eight game suspension for racially abusing Evra. ‘If I was in Glen Johnson’s position, I would have thrown the shirt to the floor,’ McGrath said on Twitter.

In reaction, Johnson said: ‘The McGrath thing … that’s actually racist. Saying what he said is racist. He is only saying that to me because I was the only black lad wearing the T-shirt. He’s targeting me because of my colour.’

In fairness, though, the majority connected with Liverpool Football Club have embarrassed themselves during the race row, so Johnson probably felt left out. He didn’t need to answer the questions Ian Ladyman put in front of him, therefore, he should have been responsible by saying he wanted to let it go because its over and done with now. But no, he dragged it up again. Idiot.