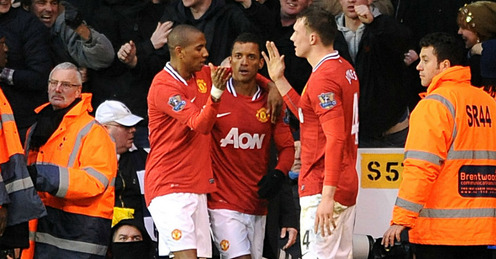 In British football there is no persona more romantic than the classic winger and no club more synonymous with these dashing figures than Manchester United.

Ever since Sir Stanley Matthews became the first football icon thanks to his wing wizardry, the role of the skilful provider has been the most coveted and cherished position in the land. The guise may have changed since the days of Matthews – with his gentlemanly manner and slicked-back hair now being replaced with the stereotypical cocky attitude and flowing-locks – but the winger is still one of the most romanticised figures in the game.

Clubs that lack a decent winger directly link it to their lack of success and those that are lucky enough to possess a winger of any repute will openly gush with excitement about them. Manchester United have done more than any football club on earth to create the status that flying wingers now have. Having begun with George Best, United went on to make it part of the club’s culture to harbor the very best wide-men in football; Gordon Hill, Willie Morgan, Steve Coppell, Lou Macari, Ryan Giggs, Andrei Kanchelskis, David Beckham and Cristiano Ronaldo,

This history of exceptional talent on the flanks for United is so ingrained into the club that not having skilful wingers is simply unthinkable. As long as Manchester United are a football team they will have players of genius on the flanks. It is something that will always be demanded by the fans.

Currently, in the era directly after the departure of perhaps the greatest winger in the club’s history – Cristiano Ronaldo – there lay three wingers, all of similar ability and age, fighting for the two wide berths in the team. So close are all three in nearly every manner that for now, it seems that not even Sir Alex Ferguson knows which one (or two) he would choose in his best team.

Ashley Young (26), Luis Antonio Valencia (26) and Nani (25) are three footballers in the prime of their careers battling for two spots in this ever evolving Manchester United team.

Park Ji Sung, also traditionally a wide player, is generally used against the better teams in more defensive line-ups, but it would be fair to say that aged 31 the Korean is coming to the end of his career with United, something possibly reflected by his lack of game time this season. Ryan Giggs is of course a legendary winger, but more often than not he is used nowadays in central midfield where he is more suited to lasting a full 90minutes.

This leaves Young, Valencia and Nani as the great wide hope for United, both for the present and for the future. However, neither of the three seems to have nailed down a spot on either flank for United as of yet. Most would also say that neither of the three has yet fulfilled their true potential on a consistent basis. It is this step-up in class that United as a club are looking for. The catch-22 of the situation is that this kind of consistent class can only be found with a settled run in the team, something none of them has really gotten as of yet because any drop in form or injury for any of them means they have been replaced by one of the others.

For example, Young has found himself in the side recently after Valencia suffered a hamstring strain. With Young’s form over the last few weeks Valencia may not get straight back into the side. Considering Valencia’s form before his injury though, maybe Nani should be worried about being dropped. However, one of the problems Valencia faces is that he seems only capable of playing on the right, whilst Nani and Young are more than comfortable playing on either side.

Nani is probably right now highest up the pecking order, simply because when he is at his best, he is better than both. He is also a modern winger, in that he is just as attuned to cutting in from the flanks to go for goal himself as he is to whipping in a cross. Both quick and agile, Nani has shown far more proficiency with his left-foot than either Valencia or Young, whilst his assists and goal ratio have been higher over the last two seasons also.

What Nani lacks that the other two have though, is an unerring work-rate. When Nani is off form you can not guarantee a solid performance from him. His unpredictability also mean that others – most notably Wayne Rooney and Dimitar Berbatov – can often get visibly frustrated with him when he is not playing at his best.

Although quite criticised by many of the United faithful, Young has had a better goals and assists per game ratio in this season than both Nani and Valencia. Granted, his goals and assists have often come two at a time in high scoring games, but it does show that Young has the ability to get an end product. Playing off the left, he is just as affective as Nani cutting in on his favoured right-foot. However, he does not have the same affect playing on the right, as like Valencia he rarely uses his left-foot.

Generally most see Young as having yet to fully adapt to the level of football that Manchester United demand of its players. Too often he will cut in, slow down play and than look to whip in a ball with more verve than accuracy.

Valencia would be the most consistent of the three. His work-rate is exceptional and he is just as good as helping to keep the ball as he is at running at a left-back and putting in a cross. His crossing is the best of the three, with a great instinct of exactly what type of cross to put in – whether high, low, dinked or whipped.

Nevertheless, Valencia’s goal scoring record is the worst of the three, as his is record for getting long term injuries, something which has hindered his progress as becoming United’s most outstanding winger more than anything.

A look at the Premier League stats this season does not give any obvious signs as to whom United should favour. Nani has played the most games and gotten the most goals (6 goals in 24 games), but has one less assist than Valencia (who has 9 assists but only 2 goals in 17 games), whilst Young has played the least amount of games but has 4 goals and seven assists in 16 games in the league so far this season.

All three have the ability to step-up a level and become truly world-class. What is clear though is that all three will not be able to do it at the same time, as simply there is only space for two wingers on any team.

All three can adapt however. Nani and Young have both at times been used through the middle, whilst Valencia has often played at right-back. The fact of the matter is though, for any two or even one to get the chance to become a genuine world-class winger of the ilk which United demand, the other one or two will have a serious decrease in playing time.

For Ferguson and fans alike, it is not a bad problem to have. All three are among the best wingers in the Premier League already and the three have between them been the difference makers more than any others this season, including United’s strikers.

Truly talented wingers such as Lee Sharpe, Karel Poborsky and Jesper Blomqvist have all found that even a master of squad rotation such as Ferguson can not keep wingers at peak form without giving them consistent game time.

Thus, as the season closes in on what will be a thrilling race to the Premier League title, Nani, Young and Valencia, all three fit and raring to go, will have more reason than most to feel the tension of squeaky-bum time. For at this point in the season we will certainly find out, who really is Manchester United’s best winger.

6 responses to “Best winger in the squad at the moment?”