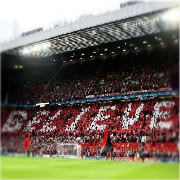 The atmosphere at Old Trafford in recent years has declined massively, therefore, Stretford End Flagsamongst other organisations have come together in hope of forming a signing section in the Theatre of Dreams.

The proposal in question has the backing of supporters groups Stretford End Flags and MUST, as well as popular Manchester United fanzines Rednews & United We Stand. Pete Boyle, a well known supporter, has also issued his support for the attempt which will be submitted to the club and each member of the Fans Forum, this Friday at a meeting.

Outline of the proposal – can also be read from Stretford End Flags’ official website.

With regards to the current un-advertised singing section within Stretford End Tier 2, we would be happy for given blocks to be designated as a singing section within this area and for supporters to be given the opportunity to move their season tickets to these allocated blocks. We feel that this will allow for groups of singers to be located closer together, which is a major factor in allowing fans to sing together in unison. As with the proposal for East lower, having regular attendees (Season ticket holders) closer together will create a group of supporters who have a strong emphasis on wanting to sing, whilst those who want to savour the atmosphere, rather than join in, can be located on the outskirts of this section.

Again, we feel that the re-creation and advertising of Stretford End Tier 2 as a singing section will help to sell and retain season tickets, as well as promote the vocal areas to match day members and branches when purchasing tickets.

Clearly identifying a section of seats within Stretford End Tier 2 as a singing section on the clubs ticket location map in order to encourage fans to sit within that area when purchasing member/match day tickets.

We feel that this proposal will not only lead to an increased atmosphere within Old Trafford, it will have a positive impact on the team and the players, as well retaining and attracting new supporters to the stadium. Sir Alex Ferguson himself has often praised the effect that the atmosphere can have on the team, as well as express his criticism at some Old Trafford atmospheres in the past.

It is felt that the current Visiting supporters section within Old Trafford does not help with the atmosphere created by Manchester United supporters. Due to its location and the proximity to the South Stand roof, this area is one of the best areas for acoustics within Old Trafford.

Supporters have asked that Manchester United look into the possibility of relocating the Visitor’s section within East Stand tier 2, as is used by visiting supporters on European Nights at Old Trafford. With the current away section becoming a Manchester United supporters section.

This proposal has been submitted to MUFC and we have asked that it can be discussed by The Fans Forum at their next meeting on Friday 9th March 2012.

We note that from the start of the 2012/13 season, Sunderland FC will be introducing a “Singing Section” within the stadium of Light, following supporter feedback. Further to this, Manchester City football club are also considering the introduction of a “singing section” within the Ethiad Stadium and have undertaken trials of this during the current season.

We also note that Liverpool FC have a designated singing section within several blocks at the middle rear of their Kop end.

“The decision to relocate visiting fans was made at the request of our own supporters. Once this decision had been formalized we then consulted with our supporters as to how they would like to see the South Stand area that previously held visiting fans utilised.  There was overwhelming positive feedback for the creation of a lively, vibrant ‘home end’ – naturally any singing of course would be down to the supporters themselves to implement”

“The aim is a lively vibrant home section, where we encourage flags, banners etc, rather than specifically a ‘singing’ section – it is our supporters who have coined this term. Our fans are well aware of regulations regarding persistent standing and we have a very positive and proactive relationship with our fans groups in relation to the communication of such issues”.

We hope that all Manchester United supporters back and support our proposal, as we all seek an Old Trafford that has the best atmosphere possible. If you are discussing this proposal on Twitter, please use the hashtag #otsingingsection