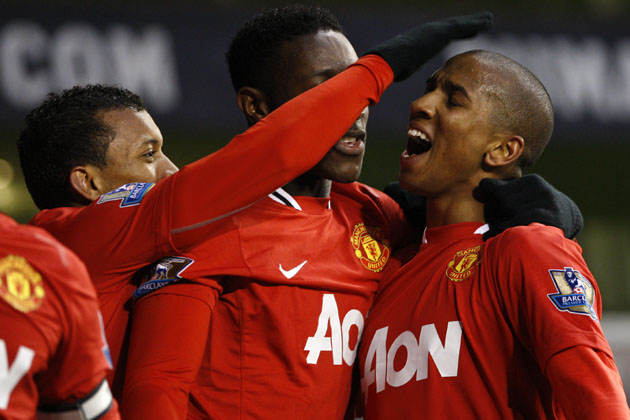 Manchester United today continued their Premier League run making it seven games in a row unbeaten, and taking 19 points out of a possible 21 since our defeat at Saint James’ Park. A vital win at White Hart Lane sees us, once again within two points behind City on top of the table.

Although Spurs had the most possession throughout the 90 minutes, it was clear that they missed the presence of Bale and Van der Vaart, and you could forgive Spurs fans for thinking that they just can’t win a game at the moment, after playing well today, and being 2-0 up to Arsenal last week and facing defeat both times.

After a sloppy start, it took United 45 minutes to get off the mark, with a great corner ball from Ashley Young setting up Wayne Rooney’s header, welcoming him back to the side after a throat infection, and giving him his 7th goal in his last 8 Premier League appearances, and his 23rd of the season.

Eight minutes before Rooney’s goal saw a controversial decision from Martin Atkinson, who ruled out Emmanuel Adebayor’s goal for handball.

The Reds went into the dressing room 1-0 up at half-time, but weren’t necessarily the better team, and it wouldn’t take a betting man to put money on Sir Alex Ferguson giving the team one of his famous talks at half-time

Although the home side had the bulk of the possession, it was thanks to fantastic performances from both Jonny Evans and Rio Ferdinand that Spurs were denied chances to gain the three points required for them to remain in third place in the Premier League.

Both defenders held themselves well during the game, with Ferdinand’s reading of the game exceptional throughout.

United’s clinical finishing then continued, after an Ashley Young goal put us 2-0 up 14 minutes into the second half.

Kyle Walker failed to clear Nani’s cross, and put the ball into the path of Ashley Young, who twisted his body into it, sending it home with a scissor kick into the bottom right corner of Brad Friedel’s net.

David de Gea once again made a fantastic save when he foresaw yet another shot from Adebayor deflect off of teammate Louis Saha, which was tipped away by the young Spaniard, and then cleared away to safety.

Ashley Young will be walking away from today’s game with his confidence boosted, after putting United 3-0 up with a great goal taken from outside the box. He slotted the ball into the top right corner, giving Friedel no chance. The London-born winger has had mixed reviews about his form all season, after inconsistencies and injuries have put him in the sidelines, but he was a stand out player today, and gave one of his best performances of the 2011/12 campaign.

Having not scored in the Premier League since his double against Arsenal in August, Young was part of all three goals today, creating the first and scoring the other two within nine minutes of each other.

A misplaced pass from Ryan Giggs saw him hand the ball to Jermaine Defoe, who scored a late consolation goal for the home side in the 87th minute. The goal was taken well by the striker, and left De Gea bemused by the shot, which was taken from 25 yards and placed into the left side of the visitor’s net.

United now have 6 wins in the last 7 games, and are hot on the heels of rivals Manchester City, who are the only remaining side we have to play in the top six for the rest of this season.

The derby, set to be played on the 30th April is sure to be one of the biggest in the history of the tie, and has the potential to decide the title winner.

Today’s game was vital to United, as at this stage in the season, we can’t afford to lose 3 points. Although we didn’t put in our best performance of the season, playing the way we did today, and still winning shows why we keep winning titles, and will continue to do so…