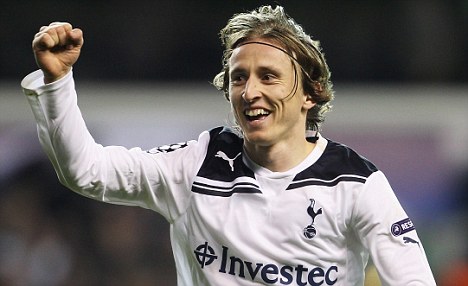 Ahead of the game at White Hart Lane this weekend, we invited the founder of Dear Mr Levy to answer a few questions. I did the same for his site, therefore, you should read my answers.

If you are interested in seeing what ‘Spooky’ has to say about football in general, I recommend you to follow him on Twitter. He’s not the worst.

Since Fabio Capello resigned as England manager, Harry Redknapp has constantly been linked with the job. Do you think he will leave Spurs for the biggest waste of time in English football?

Yes. It’s the type of job you can’t say no when asked to take it. Ego wont allow it. Harry has always been about ‘looking after number one’. Even though the England job is a poisoned chalice and the media (even the journos that adore him currently) will turn on you, I think he knows if he doesn’t take it then he’ll wonder ‘what if?’ for the rest of his days. He might take it under consideration with his family, but I think that’s just him filling up the air waves with sound-bites. He’ll be the nations top dog, so he’ll love the pressure and attention. England will probably play with pride but might struggle with the flair bit, what with that technicality that deems foreigners unable to wear the 3 Lions. He’ll earn a bundle too that will no doubt be reinvested into his property empire.

Last weekend Spurs bottled it against Arsenal. Will that affect their mentally ahead of the game on Sunday?

That North London Derby was nightmarish. Completely unexpected. We just didn’t turn up for it and that’s a massive shame but its just one game (as much as it hurts) and I think its one in isolation in terms of form this season. We’re going to want to set the record straight and prove it was an anomaly. Shame its Utd. Tough game. But we have to make up for the last performance and WHL will no doubt be fired up for it. Everyone has seen how devastating we can be at home, we have to recapture that tempo and play with width. Back to basics.

Last summer Chelsea made it clear Luke Modric was their number one priority and the Croatian showed his desire to leave White Heart Lane. Can you see him joining another club this summer? United maybe?

The Modric saga was epic. A true example of how agent can manipulate the player and use the media (newspapers, Sky etc) to generate hype and uncertainty. In addition, Chelsea got their hands dirty (who doesn’t these days in terms of subtle tapping up? Spurs have been guilty of it too in the past) and the agenda of feeding the ‘big clubs’ seemed to push full steam ahead. How dare Tottenham don’t give in and let little Luka go.

Luka was quoted as wanting to leave. Is it about the money? Yes, obviously. Also perhaps pressure in his home country for him to be playing for a ‘big club’ (whereas Spurs are not deemed that on the world stage in terms of the CL and title challenges). But if that’s the case someone should whisper to him that Chelsea are hardly the true definition of  big club. Ironic that he argued (via agent) that they could offer sustained CL qualification. Football can change in a blink of an eye. I still think he would consider a move away because of the potential to earn 100K or so. What with the stadium, Levy might well cash in to finance new signings. If we finish 3rd, I would hope he considers the challenge ahead as one worthy of remaining. Modern footballers are career players these days, its rare to see loyalty unless said club is dominant (i.e. Giggs and co).

Utd need a player like Luka. After the Berbatov saga, its pretty much improbable that Levy would let him go there. Do you have £40M spare?

In recent years, you have done well in the league challenging within the top 4. Did you ever think Spurs had enough to win the title and creep in behind United and City?

Yes and no. Deep deep down I knew it would be too much of an ask. Much like City last season didn’t truly challenge, I think this season we lack that cutting edge (that ruthless, relentless bastard mentality). Next season we might do if we consolidate in areas where we need that extra quality. Every top 4/5 club seems to be missing an ingredient or two, some more than others. This season, had certain results gone our way, perhaps the gap looking up would not be so much. Taking away the two defeats against both you and City at the start of the season, the Arsenal lose was probably the first time this season we’ve deserved nothing out of a game. Got to be proud of our progress. But we’ve got to learn from mistakes and build on the experience. Not easy forging a winning mentality. Doesn’t happen over night.

How well has Scott Parker settled in?

Amazingly well. Shame he’s not available for the match (although if Sandro is fit and ready he’ll offer similar steel be it in a different style). Did not want Parker signed. Perhaps I was blinded by the fact he played for a West Ham team that would have made me look good in the centre of midfield. But he has been exactly the type of player we needed to bully and protect and win the ball back whilst Modric dictates tempo. No surprise that when Parker came in, we went on a long unbeaten run that shaped our season. Sandro, for the record, is a beast of a player. I hope we get to see a lot more of him before he moves onto Italy or Spain (I’m being cynical here but get the feeling that’s his ambition in the long term).

Finally, give us your prediction.

My head says a draw. My heart says a win. If some mad scientist took my head and heart and forged it together with black magic I would go with 5-1 Spurs. Back in the world not frequented by witches and Buffy the Vampire Slayer, I’ll remain cautious.

I want us to turn up for it, but its imperative we are disciplined. Utd might not be comparable to some of the sides that have brushed us aside in the past but that doesn’t mean it will be any easier. Being clinical when we do have chances will be key.

Should be a corker of a game. A draw for either side will probably be a disappointment in the grand scheme of things although more for you than us. We have to play well from the off. I’m cautious, but this is our best chance for a while to really stick it up your bollox.