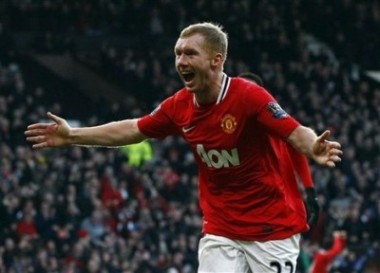 After scoring his second goal since coming out of retirement, Paul Scholes spoke to MUTV and claimed Manchester United might need to win the rest of their fixtures in order to beat City in the title race.

Paul Scholes, who has won nine titles in his outstanding career, believes the squad is prepared for the run-in but thinks there will be a few bumps along the way (probably due to our complacency).

The 37-year-old scored the opener last weekend at Carrow Road and has preformed immensely ever since returning. And funnily enough, there hasn’t been as many complaints directed at our midfield since Michael Carrick and himself formed a brilliant combination.

“There is no point drawing games so we were throwing everyone forward going for that goal, and I am sure we will do the same thing again,” said Scholes.

“Of course, three points instead of one is a big difference. That is what we are here to do.

“We realise we may have to win every game to win the league, but we are ready and prepared to do that. Hopefully, we can do it.”

But the title, as far as I am concerned, is City’s to lose. They suffered a few wobbles throughout December and January which is the reason how we managed to catch up, however, if we didn’t drop points against Newcastle and Blackburn Rovers we would be in the driving seat. Our giddy neighbours are no longer showing signs of cracking under the pressure which is why I agree with Scholes. We cannot afford anymore slip ups, especially having the tougher run-in.

Manchester United face City at the Etihad on Monday 30 April and it’s believed to be the decider.