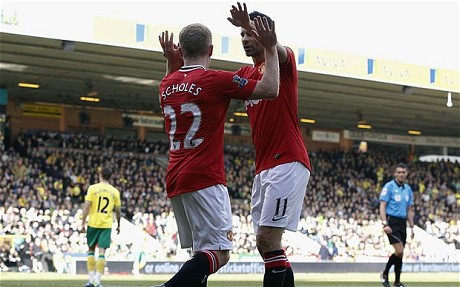 Manchester United managed to stick tight to City on top of the Premier League table, keeping the lead to a minimum of 2 points, thanks to an unconvincing 2-1 win over newly promoted Norwich.

1. Complacency has been our biggest enemy in recent months and is the consequence for getting us knocked out of various competitions but we sensed it again today despite knowing the threat Norwich can bring to the table. A good start got better when Paul Scholes opened the scoring after a brilliant cross from Nani. However, we sat back and invited them to come attack us after scoring, which is something that really shouldn’t surprise us seeing it has happened regularly since the 2011/12 campaign began. And this attitude looks meaningless when the opposition score a late equaliser for us to sense a bit of urgency and grab a later winner – everybody goes home happy, from a United supporters’ point of view. If that habit continues to creep into the dressing room during the title race, we won’t win the league so lets hope that doesn’t happen.

2. Despite the lack of service up front, Danny Welbeck worked his socks off. If he didn’t receive the passes he called for, Welbeck dropped deep and chased the ball showing real determination in order to win it back with the ambition of creating something worthwhile. Danny does this whenever he plays which is the reason why Ferguson usually starts him alongside Rooney ahead of both Berbatov and Hernandez.

3. The lack of discipline in our midfield added to the pressure our back four and David de Gea had to deal with. Our young Spanish goalkeeper continued his quest to prove doubters wrong, pulling off terrific saves whenever Norwich managed to get past Rio Ferdinand, who is also within shout for man of the match. Ferdinand’s ability has been questioned by not only supporters but Sir Alex Ferguson earlier this season due to his loss of speed, although, he seems to have adapted brilliantly to that pulling off leader like performances in previous games.

4. Ryan Giggs marked his 900th appearance for Manchester United and to make it even more special, he scored the winner after 90+ minutes of play. The reaction from our away supporters was fitting with chants of “he’ll shag who he wants” ringing loud and clear throughout Carrow Road. Giggs’ performance was nothing to go by though; most of United’s attacking came from the right flank leaving the 38-year-old look a bit stranded out on the left. However when Ashley Young replaced Javier Hernandez, the Welshman sat in behind Welbeck in a more influential role.

5. Wayne Rooney wasn’t in the squad due to what we expect is a sore throat. However, I don’t think it would be too cynical of me to question whether it has anything got to do with a disciplinary issue – looking at his previous record, you can’t blame me. Rooney missed the second leg against Ajax with the same issue.

6. Patrice Evra was caught out of position a number of times throughout the game; something we have noticed happening a lot ever since the 2010 World Cup in South Africa. The French full back is brilliant with the ball but the defensive side of his game deserves to be questioned…