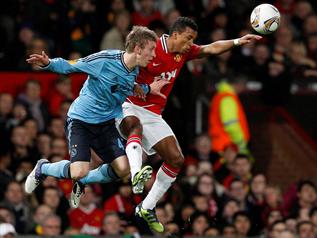 An early Javier Hernandez goal ensured Manchester United progressed through to the next round of the Europa League this evening despite a 2-1 loss on the night to Ajax.

Sir Alex Ferguson chose a side which contained largely the squads youth element. In fact you could have thought you had been sent forward in time 4 or 5 years when you saw that the back four consisted of Rafael, Jones, Smalling and Fabio, with David De Gea keeping goal. The young defence was selected along with those such as Berbatov, Park, Nani and Tom Cleverley who required match practise and fitness ahead of the weekends fixture at Norwich.

Both teams started the game very brightly with United wanting to kill the tie off early and Ajax wanting to give themselves a chance of pulling back the two goal deficit from the 1st leg. United came close to taking the lead within the 1st minute when Nani cut in from the left to only see his rasping shot parried by the Ajax keeper just out of the reach of Park. Ajax responded with two early attacks of their own and forced the United defence to concede two early corners. Both were taken by United target Christian Eriksen, both were up to United standards as they came to nothing. The end to end theme continued when Berbatov almost slipped Nani in down the channel, this time the Ajax defence was alert to the threat and Nani was forced off the ball before he could take it into his stride.

Berbatov however only had to wait a minute more before picking a pass that would lead to a United goal. In the 6th minute Park stole the ball in midfield and looked to start an attack by forwarding the ball to Berbatov who looked up to see Hernandez on the shoulder of the last defender, as is expected. His pin point pass aloud Hernandez time to wrong foot his marker and slot cooly home to give United an early lead and, all bar the shouting, surely finish the tie off.

You could have forgiven Ajax for letting their heads drop now as they needed to score three times without response at Old Trafford. Ajax heads didn’t drop however, and they went on the offensive. Their tempo increased and were taking every opportunity to shoot at goal. For all their possession, and attempts to test De Gea, Uniteds defence hadn’t been overly concerned. The threat was certainly there, but the end product in and around the United box was lacking.

With that in mind The Reds felt as if they could afford themselves to be a little more patient on the ball, picking and choosing the right moments when to go on the offensive. When they did attack Ajax, United found themselves in good positions. Berbatov again at the centre of Uniteds opportunities, though perhaps lacking in a little confidence found himself trying to square a ball in the box when on other days he would have tested the keeper himself. A desire as always from Rafael and Fabio to get forward always gave United options and both found themselves in good shooting positions, but never troubled the Ajax Goalkeeper.

Meanwhile, Ajax were still working hard getting forward, pressing United and trying to create chances. It wasn’t until the 24th minute though that De Gea was tested. Ozbiliz won the ball on the right deep in the United half and shot on target. The angle was against the Ajax man but De Gea still had to react quickly and did very well to hold the shot, diving to his right. Ajax’s hard work eventually paid off in the 37th minute. Attacking down the right, Ajax centred the ball which found its way to Ozbiliz on the edge of the box who struck the ball early, low to De Gea’s right giving him no chance.

The Reds were sparked into life by the equaliser and immediately went on the attack, coming close twice in the same move. First from Nani, once again cutting in from the left and forcing the keeper to parry his shot. That parry resulted in Rafael picking the ball up and moving to the wing where his cross met Hernandez who tried to swivel to get his shot away. It would have been some finish but he couldn’t quite connect properly and the ball found its way harmlessly to the keeper.

Going in level at half time was disappointing but United had come under pressure from Ajax but had defended resolutely. Going forward The Reds looked reasonable, and chances were coming.

The 2nd half started with Ajax really asking questions of United. For 20 minutes, in fact, it was all Ajax, wave after wave of attack and now they looked more dangerous than in the previous half. Much of the pressure was a result of Ajax really pressing United in the midfield, forcing Cleverley (who is not yet fully match fit) and Park into mistakes which were inviting Ajax onto them. However, the United defence was holding out well for the large part. An Ajax corner though brought a magnificent save from De Gea. United had switched off, allowing Seim a free header which he powerfully connected with. Only excellent reactions and strong hands from De Gea kept the scores level.

Ferguson responded by bringing on Johnny Evens and Paul Scholes for Cleverley and the extremely ineffective Ashley Young. It took a few minutes for the desired effect to take place, with Scholes and Evens getting used to the Ajax tempo. Once Scholes had found his feet though United gained some control, holding the ball much better and taking the sting out of the game. The introduction of Welbeck for Berbatov also gave United some more life further up the pitch for Ajax, who now looked to be running out of steam, something else to deal with.

With United now looking more composed they finally looked to pose a threat in the final 20 minutes. Nani again coming closest, this time cutting in from the right and thundering a shot passed the helpless keeper on to the cross bar. The fresh legs of Welbeck also troubled the Ajax defence when he broke down the right. Unfortunately his good run only led to a corner when his squared ball to Hernandez in the box was cleared for a corner.

Having been under so much pressure throughout the match, Uniteds yound defence can be praised as they delt with pretty much everything which was thrown at them. However, a lesson was learned when an Ozbiliz free kick 3 minutes from time was floated into the box. Uniteds defence switched off completely and allowed runners to attack the ball freely. One of them, Alerwiereld, found himself on the end of the free kick to head home and give Ferguson’s men a nervy final few minutes.

United held out and took the tie 3-2 on aggregate and will now meet Athletic Bilbao. Once again we do things the hard way.