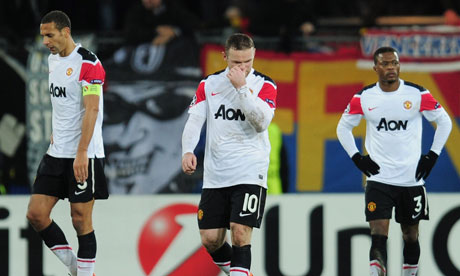 The decline of the Premier League is a hot topic at the moment with a high possibility of there being no English clubs in the last sixteen of the Champions League for the first time since 1998. This season’s top two, Manchester United and City, were knocked out in the group stages and qualified for the Europa League as a result.

In recent years, people have continuously discussed whether the La Liga was better than the Premier League and vice versa. Nobody came up with a conclusion until Barcelona dominated Europe for a couple of years, suffering a few knocks along the way and beating United in two European finals. Having a successful international team helped also.

However, there was always an argument as far as Premier League supporters were concerned. People give us credit for our physicality and willingness to let the game run instead of stopping it frequently so that the players can throw handbags at each other – demonstrated in previous El Classicos between Real Madrid and Bercelona. They have similar ties in Italy, but I’d prefer to not go on a witch hunt.

And I’m not the first to comment on the tomfoolery which occurs in Spanish football. I mean the diving, play acting and dishonesty. Yes, it happens in England too but they take it to a different level of stupidity.

Another point of view is it’s about opinion. Which league do you prefer? It’s one mans word after another, although, if you realistically look at recent stats the Premier League clearly shows a decline. We have lost some of our better players to foreign outfits in recent years. Ronaldo was Ballon d’Or winner, Fabregas captained Arsenal while providing leader like service to the Gunners, Boateng had a big player swagger at Portsmouth and is proving himself in Milan. The list goes on and on but the point I am trying to make is that you cannot keep dominance if you keep losing star players.

The question some might ask is why are these big players leaving England? Well, some had dreams of playing for different clubs and others worried about the tax being put on their wages. Not to forget those that missed sunshine and were sick of the cold and rain. Basically, if a footballer comes into the Premier League and proves himself, there’s a good chance clubs in Spain and Italy will be interested in his signature.

The standard is definitely not as high as it was in the past which is why, I believe, the league has become more competitive with smaller teams causing more upsets. A lot of the bigger clubs in England have been trashing each other with United beating Arsenal 8-2 and City beating the Champions 6-1. But the Premier League wasn’t going to stay on top forever – these things take roundabout swings every now and again.

6 responses to “Are the Spanish and Italians overtaking the English in European football?”