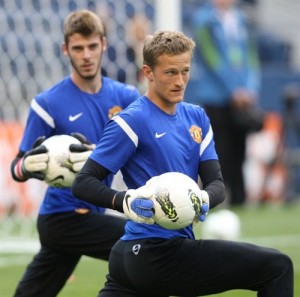 The battle for the Manchester United number one jersey is an intriguing one, I wonder if even the great Sir Alex Ferguson knows who his first choice keeper is? Personally I’m unsure as to whether he does.

Are any of these two going to make it at our great club? Is David de Gea set to be the new Edwin Van Der Sar? Or is he going to flop like Massimo Taibi? Is Anders Lindegaard going to become the best Danish keeper since the great Peter Schmeichel? Or is he going to end up sitting on the bench for the majority of his United career, ‘picking his nose’?

For the first half of the season De Gea was hit and miss. He had every United fan on the edge of their seats for every set piece and corner. His inability to claim the ball in a crowded penalty box was apparent for the opposition to see, and teams targeted this, which seemingly made him even more nervous from a dead ball situation. On the other we got a glimpse of a truly world class keeper. Some of the saves he has made in his short career have been nothing short of exceptional. The one that springs to mind is the superb stop from Juan Mata’s free kick in the 3-3 draw at Stamford Bridge.

On the other hand we have Anders Lindegaard. The Dane joined the club in January of last year for a fee of around £3million. Fans only got to watch him pull on the United jersey in two cup games last season so judgement on him was fairly reserved. This season he has made 11 appearances for the club, when picked he brings his calm and relaxed persona onto the field with him. This seems to rub off onto the back four and more clean sheets are kept under Lindegaard so far.

Both keepers have their own pros and cons. The stunning saves of the spritely young Spaniard, and the cool head of the experienced Dane. I firmly believe that both could stay at the club for years to come, with both being utilized in games with suit their respective strengths. Let’s not forget that De Gea is 21 years of age. How many keepers of such a tender age could break into the first team of our famous club? Give him time and lets all watch him mature into the world class keeper that we all know he potentially is. We should all get off his back and get behind him.

With Anders’ cool head beside him we have two great keepers on our hands. However David de Gea is the man for me. Who gets your vote?

18 responses to “The goalkeeper discussion – Dave or Anders?”