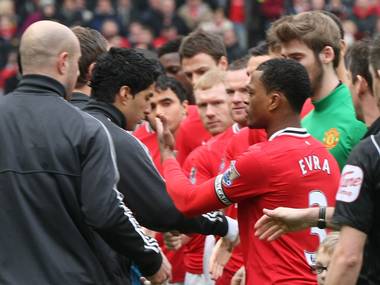 Let’s face it, as clubs, Manchester United and Liverpool will never exactly see eye to eye, there is far too much history and rivalry for that. However, as an absolute minimum there should be some mutual respect between these two massive clubs. Today,the behaviour of Liverpool FC and one of their biggest players, was nothing short of a disgrace.

Patrice Evra is no angel. It is easy to see why he is one of the most hated players in the English game. He gets under the oppositions skin frequently and his antics with France at the World Cup 2010 only furthered his bad reputation. Does that mean he deserves to be condemned by Liverpool FC, their fans and their players? Not a chance. Regardless of Suarez’ excuses for using racist language, Evra took offence and that is surely all that matters? It doesn’t matter that the phrases Suarez used are supposedly “acceptable” in Uruguay, we are in England and here it is racist. Besides, is it believable that Suarez said those words as a form of endearment towards Evra?

Suarez was subsequently banned for 8 matches and fined £40,000. All through the trial Liverpool stood by Suarez releasing a particularly vitriolic statement in which they refused to acknowledge that one of their players had racially abused another footballer and stood by him. When Evra played against Liverpool in the FA cup, he was booed and jeered by the vast majority of Liverpool fans. Again Liverpool FC refused to condemn this and put it down to “friendly banter” Let’s not forget that Patrice Evra is an innocent man. The only thing he is “guilty” of is reporting a man who racially abused him. The behaviour of both Liverpool and Suarez was nothing short of a disgrace.

Reluctantly, Suarez did serve his ban, albeit protesting his innocence and the injustice of the whole situation (again, a view shared by Liverpool FC). It seemed like fate that Suarez’ first start since completing his suspension would be against Manchester United, and controversy was always going feature at some point. As the two teams lined up to shake hands, everyone held their breath to see what would happen. As Suarez approached, Evra held out his hand, in what can only be described as a professional and generous gesture, after all, this man had racially abused him. Suarez, quite remarkably, failed to even acknowledge the presence of Evra and understandably feeling further humiliated, Evra reacted.

In ignoring the offer of a handshake from Patrice Evra, Luis Suarez had already needlessly set a nasty tone for the whole match. Again, it’s important to remind ourselves that Luis Suarez is the guilty party here , not the other way around. Not content with racially abusing Patrice Evra, he decided to humiliate and embarrass Evra even further. The day should have been only about the football, but that notion was destroyed before a ball was even kicked.

Kenny Dalglish yet again refused to condemn Suarez for his actions, instead blaming the media for “playing the situation up” and playing ignorant. For a manager of his intelligence and experience, this stance is unforgivable. Can you imagine his reaction should, say, Glen Johnson be the victim of racial abuse? Does Dalglish realise that by refusing to condemn his Suarez, he is effectively endorsing his actions?

If you want to discuss this article with me or Manchester United in general, add me on Twitter @stephenbusby88.

8 responses to “The shame of Liverpool”