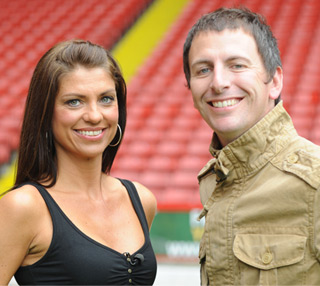 Ahead of the important game Saturday morning, we’ve invited John Fendley from Take It Like A Fan to talk about Liverpool’s chances against the champions. ‘Fenners’ has done lots of work for Sky Sports in the past being a reporter for the Soccer Saturday show, so he’s worth a follow on Twitter.

How have Liverpool performed so far this season and where, realistically, do you see them finishing in the Premier League?

It’s been an improvement. I think there has to be more energy and urgency about the side. I also think tempo is massive and it’s something United do very well when at their best. The draws at home are what everyone will look at – perhaps it’s become a mental thing – however it was encouraging to see how they performed against Wolves on the back of big wins, keeping the momentum going. I think 4th is a possibility if the team can sustain the momentum. It’s not as if Chelsea or Arsenal are pulling away so it’s still realistic. I reckon point from Old Trafford would cement that belief.

Kenny Dalglish has spent a lot of money since taking over from Roy Hodgson. Are you pleased with the players he has brought in, taking account of how much they cost?

Everyone hammers players who have cost a lot of money. Its what fans do. I think they’ve done okay but there is room for improvement. Andy Carroll has shown signs that his confidence is returning but he needs the sort of service Gerrard delivered when he came on against Newcastle, on a regular basis. I do think players like Jordan Henderson and Charlie Adam are technically excellent. I was very excited about Adam joining, I think he’s a great player – after seeing him in the flesh for Blackpool I realised what a range of passing he has – particularly his long game – great to see that invention – it doesn’t always come off but he doesn’t hide. I love a good pass as much as a great goal, therefore I must admit that Paul Scholes was (is!) probably my favourite player to watch in terms of passing, now that Souness isn’t playing of course.

Who do you think is your best player right now?

Skrtel and Agger have looked solid but I’ll go with Craig Bellamy. So much more than someone who just gets in people’s faces. A great footballer, makes good decisions, technically excellent, still rapid and knows what it takes to win a game whatever it takes – which is vital. Demanding of his own players which is again, vital. Cliche I know, but most would have him in their team.

Finally, give us your prediction for the game.

I have to go on the pitch at half time in front of the Stretford End so I’m hoping to go for a low scoring draw, 1-1! As a football fan going on the pitch at any ground is a thrill, but to walk on the pitch at grounds like Anfield and Old Trafford is something else. I’ve bought some new trainers especially for the occasion!

Cheers for the pre-match chat, Fenners.