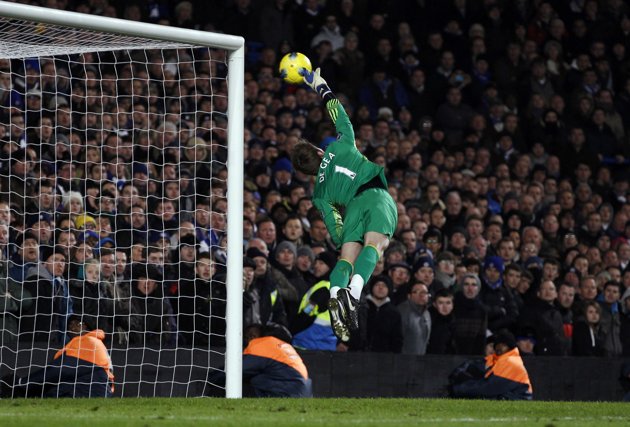 David de Gea put in another top performance against one of England’s big teams yesterday when Manchester United drew 3-3 with Chelsea at Stamford Bridge.

Whenever the 21-year-old moves the British press are quick to throw criticism in his direction, ever since they labeled him a flop after his debut against City in the Community Shield. However, they were quick to contradict themselves yesterday when he did remarkably well to save Juan Mata’s brilliant free kick in the dying minutes.

Ferguson was quick to praise to young Spaniard after the game taking note of how he’s still not used to the English game, which is something people really need to put into account before jumping on the infamous bandwagon.

“We know his potential, we know he’s an outstanding talent and we’ve got to trust that,” said Ferguson. “We bought him on the promise that he could be our goalkeeper for 10 years and he showed that today. He dealt much better with all the aerial balls that came in. It’s experience. He’s not used to the English game, he’s had some bad moments this year in terms of dealing with that type of play. But today, I think he’s got the bit between his teeth and he’s done well.”

2 responses to “Fergie: De Gea is an outstanding talent”