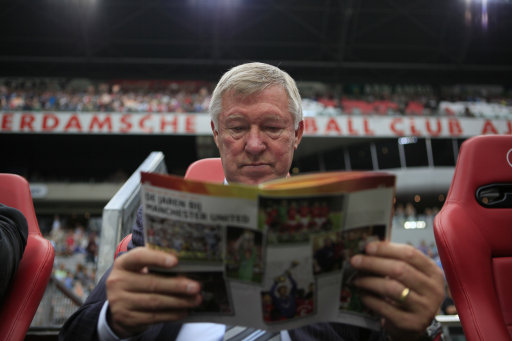 Recently, Sir Alex Ferguson was quoted in claiming he was ready to remain the boss at Manchester United for a further 3 years, if what the Scotsman said was true, that would mean he would still be at the helm at the age of 73, something which myself and lots of others strongly doubt. Sir Alex has always stated he shall carry on until his health means he can no longer continue, but the way he has gone around building his last United team suggests that he has a date in his mind in which he will finally call it a day.

The debate shall rage on as to who will replace Ferguson, it will be by no means a simple task, the legacy and success he has built leaves the man that takes over with gigantic shoes to fill, there is understandable concern amongst United fans as to how the team will react without Sir Alex as manager when he goes, which has led to the mentioning of current managers who could potentially replace the Glaswegian.

Currently managing Barcelona who many argue to be ‘the best football team ever’ and there is substance to that claim, since arriving at the Catalan Club for the 2008/2009 season, he offloaded big name players such as Deco and Ronaldinho, he risked upsetting fans when he replaced those stars with at the time ‘small signings’ Dani Alves and Gerard Pique, Guardiola placed his faith in youth when he promoted Sergio Busquets and Pedro who are now an essential part of the Barcelona squad. In this first season he won the treble of the domestic league and cup added to the Champions League- the first Spanish side to achieve such a feat. The following season, Barcelona won La Liga again but fell short to Jose Mourinho’s Inter Milan side who went on to win the competition. Last season, Guardiola’s side won La Liga for a third consecutive season and once again won the European Cup to further enhance their claims to be the best football team ever.

There is no doubting the success that Pep Guardiola has brought to the Nou Camp, Barcelona play very attractive football despite some individuals in the side earning a reputation for play acting. If you are to be hypercritical of Guardiola, some often point to the fact most of the team were already there before he joined and that Lionel Messi, the most gifted player of his generation is performing at incredible levels season after season which is bound to bring a degree of success to the team, Guardiola has also made some transfer mistakes, most notably he bought Zlatan Ibrahimovic for the equivalent of £60m and the Swede never performed to the best of his ability for Barcelona. Pep Guardiola is definitely going to be up there when the time to replace Sir Alex comes around, but will he want the challenge?

The name of David Moyes frequently gets a mention when this discussion is on topic, currently managing Everton; Moyes has done remarkably well with virtually no resources at his disposal. I believe he is a candidate due to the fact he has done well without much money on transfers, something that could suit United’s approach to the transfer market under the Glazer family. The question marks appear whether Moyes will ever be good enough at a club like Manchester United, whether he can make the huge step up and fill the gap left by Sir Alex Ferguson. Moyes has led Everton to European football, found good value in players such as Tim Howard, Mikel Arteta and Tim Cahill along with buying and selling smartly in his tenure on Merseyside. Moyes will not be everyone’s cup of tea, but a small proportion believe he has the ability of getting everything out of what he has available to him, something which could prove vital under United’s current ownership.

The self-proclaimed ‘Special One’, Mourinho has demanded and gained success where ever he has managed, winning the treble with Porto, before taking the English game by the scruff of the neck when he led Chelsea to consecutive Premier League Titles before joining Inter Milan where he again, won the treble, a remarkable achievement with a fairly average squad. Mourinho is currently facing his biggest challenge to date, toppling the ever-impressive Barcelona, who beat Madrid to La Liga last season although Real did claim the domestic cup. Reports in Spain are suggesting that Mourinho will quit the Bernabeu at the end of the season and with his Madrid side 7 points clear at the top of La Liga, it is becoming increasingly likely that he may go out on a high.

Jose Mourinho would almost guarantee success at Manchester United, some believe he has wanted the United job for a long time, but obviously can’t access it whilst Sir Alex is in charge. He usually needs money to acquire this success, something that may not go down with the Glazers, and he has generally abandoned youth at his previous clubs, something that would go against the ways of Sir Matt Busby and Sir Alex Ferguson, who both built their United teams on prospects from the academy. Mourinho also brings a degree of ignorance that is frowned upon by some football fans, would we want a man in charge that drags the name of the club through the mud on his way to gaining success?

As a former player at the club, Ole knows what is expected at Manchester United. After retiring as a player, he took the job as Reserve team manager, where he gained success before becoming manager of the club he represented before he joined United as a player, Molde. Last season, Ole led Molde to their first league title in their 100 year history, an incredible achievement. This has led to many calling for Ole to be in consideration for the United job went Sir Alex calls it a day, although many would love to see Solskjaer back at United, I think calls for him to be manager are premature, yes what he did with Molde was amazing but I think he must prove himself elsewhere if he is truly going to be a candidate to take over from Ferguson.

Here are just a few of the names who are apparently in the running to replace Sir Alex when he does eventually retire at United, there are many more that are said to be in the frame for the job and if it really is 3 years till a decision is needed to be made then anything can happen in that period, new faces will appear and older ones fade away, circumstances will inevitably change and those thought to be in the running could drop out at any given point, all we do know is, whoever is chosen to fill the void left by Ferguson, they are in for one hell of a job.