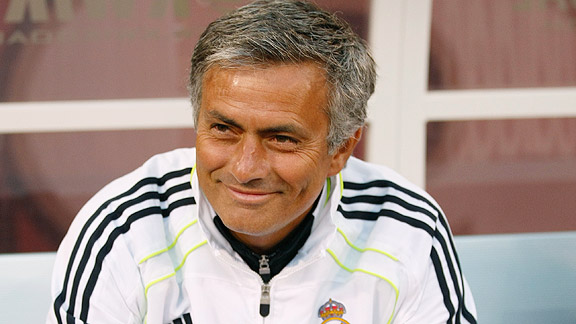 On Saturday night, after Real Madrid’s comfortable 3-1 win over Zaragoza, Duncan Castles from The Sunday Times said Jose Mourinho had decided to quit ‘Los Blancos’ this summer for a Premier League club.

He has spoke about a move back to England ever since leaving Chelsea back in 2007. And over the winter break in Spain, Jose said he would return to England in a couple of years. This got people talking and we now understand that if he beats Barcelona to the La Liga title, this season, he will consider his job done with the Spanish powerhouse.

And the interesting thing about it is, Mourinho has a clause in his current contract that gives him permission to talk to Manchester United about a possible move if/when the club comes calling. However, if it happens to be another club, they will need to pay a huge compensation fee.

The big question is: Would you be satisfied if Jose Mourinho became manager of our club when Ferguson decides to call it a day? He’s a winner and that’s the mentality we need to keep at the club when we’re suffering with debt.

Although, he brings negatives with him too. Jose’s ego suggests he means more than the club in almost every circumstance. In his first press conference in England, as Chelsea manager, he told the media that he was ‘the special one’. My reaction to that was ‘who does this smug prick think he is?’ People also used to call the team ‘Jose’s Chelsea’. Can you imagine hearing that being said about United?

Mourinho, in the past, has made his feelings heard about certain presidents at Real Madrid. This type of behavior causes unsettlement at a club and could influence players to take either sides in the argument. It doesn’t send out a very good message.

The build up to big games, especially in Spain, focuses mainly on what can be described as childish behavior from Jose Mourinho. Meetings with Barcelona last season were nothing less than embarrassing and proved difficult to watch. At times, it looked like the ‘best dressed man in football’ was being out done by Pep Guardiola, who in all fairness, stole the show – on and off the pitch.

Taking over from Sir Alex Ferguson is, by far, the biggest job in football. Mourinho has the winning mentality but certain attributes need to be matured and adjusted.

Doesn’t seem interested in giving the youth a chance

Sir Matt Busby didn’t only make a team. He made a club. The main part of his philosophy was to show faith in the youngsters that wore the shirt and it’s something our supporters are extremely proud of. Sir Alex Ferguson took this on the chin and did the similar forming that wonderful class of ’96.

Mourinho, on the other hand, never really concentrated on the youth at any club he managed. The argument to that is the fact he doesn’t settle anywhere easily, spending an average of 2-years at each club (Benfica, Uniao de Leiria, Porto, Chelsea, Milan and currently Madrid). Whoever takes the biggest job in football will be expected to be able to settle for years and experiment with the youngsters.

Boring but effective style of play

Jose Mourinho’s style of play has usually been more defensive than anything else. At Chelsea he played negative, yet effective football which resulted in 2 Premier League titles, 1 FA Cup and 2 Carling Cups. And with the likes of Didier Drogba, Arjen Robben and Damien Duff in the squad, you’d think he would spice things up a little.

It’s difficult to comment on the style of football “his Milan” played because of Italian football as a whole. The counter-attacking instinct suited Jose down to the ground, winning 2 Serie A titles, 1 Coppa Italia and 1 Champions League.

In Spain, however, he had no other choice but to adjust his tactics with Barcelona winning everything playing what’s known as tiki-taka football. And with players like Cristiano Ronaldo, Kaka, Karim Benzema and Mesut Ozil how could you possibly play defensively? That would be a crime.

He only managed to win the Copa del Rey last season but this year, Real Madrid are 7 points clear of Barcelona at the top of La Liga and people are already questioning if the title is out of the Catalan’s reach.

The football we have witnessed at Manchester United isn’t exactly exciting, but at times it gets you off your seat. Considering the amount of injuries we’ve suffered, you can’t complain too much. Ferguson has brought out mouth watering moments in the past and we’d like it to continue in the future.

His success relies on power in the transfer market

Mourinho has always been one that enjoyed a couple of signings. At Chelsea he had the backing of Roman Abramovich, who at the time appeared like he had unlimited amounts of money growing somewhere. However, with the Glazers at United he wouldn’t get that money to spend in the transfer market. Fergie uses the excuse that there’s no value in the market way to often and even the most biased fans, like me, don’t believe it. Sounds very Arsenal like.

But this could also suggest that he fancies the Manchester City job to try make them a dominant club. However, I am not saying Roberto Mancini’s job isn’t safe but if City had interest from a world class manager like Jose, they wouldn’t hesitate.

We mightn’t have much of a say in the matter. We need to keep winning to feed that vicious debt the Glazers put over our heads back in 2005 or else the club and fans will suffer.

8 responses to “Could Jose be ‘the special one’ at United?”