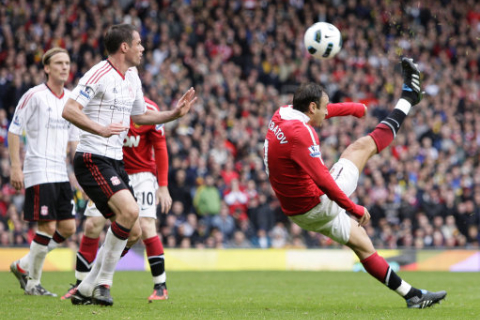 Let me start by saying I would never turn down 3 points in a scrappy, boring and lack of anything interesting 1-0 win. Points win league titles and all that jazz. However, what makes football most enjoyable for me are the moments that make you smile. Moments that make an entire crowd go “awwww” in unison, moments that make you curse with happiness, moments that you can’t wait to see when you get home after the match, and if you are anything like me, moments you rewind and watch several times in awe.

I am talking about that instant control, that nutmeg, the turn that left the defender on his arse. Not forgetting that chip that almost went it, that 40-yard cross field pass to a teammates foot. You know exactly what I’m talking about.

However, my deepest worry is that moments like this are getting lost in some fans desperation for 3 points and winning the quadruple every year.

I would say there are only 4 or 5 players at United capable of real jaw dropping, semi inducing moments. Dimitar Berbatov, Luis Nani, Wayne Rooney, Ryan Giggs and Paul Scholes. Yes, others do some brilliant stuff too but not with as much ease as these guys. Scholes and Giggs aside, the other 3 players seem to be the ones that attract the fans criticism when they don’t perform to man of the match standards every game, which annoys me slightly.

I will be the first to admit that Berbatov has not been as successful as we all thought he would be when we signed him for £30million but his personal highlight reel of touches, flicks and skill would make a great backing video for some serious love making session. The man is a genius, and even when finishing top goalscorer in the league had his fair share of stick from fans. Easy teams, not in the big games wah wah wah. Berbatov is a thing of beauty. His ability to control the ball with lazy lift of his boot is out of this world, almost sexual.

Then we have Nani. He has been one of our most dangerous players over the last few years. His assist tally not only tops the club but most other players in the league during this time, not to add a decent amount of goals yet he gets the inconsistent tag thrown at him any game he doesn’t score or set one up. His decision making could be better and we would all love for him to play like Messi each week but he is still a player of skill and enjoyment who seems to get punished for wanting to try something different. His ability to make a full back look silly is ridiculous and as his assists and chances created stats suggest, he does have a final ball but for me his ability to entertain and produce moments of magic that many players can’t, makes him a joy to watch. What stands out for me is how brave he is. Not only will he want to ball after being clobbered by a defender but how he wont let a poor cross put him off, wanting to have another go. Try and trick and fails, get him the ball again and he will no doubt try and trick his way past the defender again.

Lastly on my list was Wayne Rooney. Last week we beat Arsenal 2-1 away from home with some great performances through the team. It was a vital 3 points yet within minutes of the final whistle I saw fans stating how poor Rooney was. He wasn’t poor, his just wasn’t a top performer. His did plenty of unselfish work in the middle of the park and was always looking to start our attacks but my point is why look to find players to slate rather than praise players that deserved it? We won for heavens sake. Lets enjoy the moment and relive the positives. Lets talk about the beautiful winning goal. Tremendous wing play by Valencia, cheeky little 1-2 and a local youngster wheeling away in delight. Beautiful.

Rooney has produced so much magic, and by that I mean touches, flicks, skill etc (not to mention how many goals, assists and man of the match performances), in his time at United that its almost taken for granted. Next time you watch, enjoy his little flick, his first touch or his Paul Scholes impression as he effortlessly knocks a 40-yard pass out wide because these are the moments that make our game beautiful.

If you can appreciate these then watching those crappy 1-0 wins becomes a lot easier to swallow. Call them your “spoonfuls of sugar” if you will.

8 responses to “Are fans still enjoying our beautiful game?”