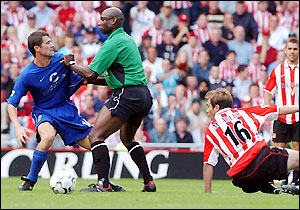 Before the FA Cup encounter between Liverpool and United this weekend, we invited former Liverpool and Ireland international Jason McAteer on to the blog so he could answer a few questions for our ‘view from the enemy’ feature. However, ‘Trigger’ refused to answer our questions on Dalglish, Liverpool-based media and his relationship with United players who played with him for Ireland’s international team.

How’s life been since retiring? Do you still go to games and have contact with ex-teammates or managers?

Life since retiring has been difficult at times and not playing is the main reason why, but working closely with Liverpool Football Club and the TV company has helped. I still go to the games and watch Liverpool closely because I work at Liverpool TV, so it has been great to stay involved. I’m in touch with a lot of my Irish teammates past and present and also my ex-Liverpool teammates.

Best player you’ve ever played against and why?

I’ve played against some of the greatest players in the world and that has been a privilege of mine. To pick one would be very difficult, but if I have to choose it would probably be Paolo Maldini who played for a AC Milan and Italy. He was very quick and well capable of reading the game which made him a very difficult opponent to beat.

In the fourth round of the FA Cup, Chelsea drew QPR and Liverpool got United. This certainly wasn’t what the FA wanted due to recent racist allegations made towards clubs and their fans being full of both anger & denial. Do you expect much crowd trouble before/after these games?

Football has this knack of throwing up situations which people look at and it cause’s big talking points. Obviously the game between Liverpool and Manchester United has the added spice of the racist claims against Suarez on Evra but Chelsea also have the added spice with their racist claims against John Terry. I don’t think there will be trouble before the games purely because these players are professional and are out on the pitch to do a job for the football teams.

Where can Liverpool hurt United and give us an honest scoreline prediction?

When Manchester United played at Anfield earlier in the season they paid Liverpool the ultimate compliment by playing six defenders in their starting 11. Liverpool should have won the game but only got a draw. Liverpool are in confident mood after their recent victory over Manchester City and I think that will give them the confidence to beat United on Saturday.