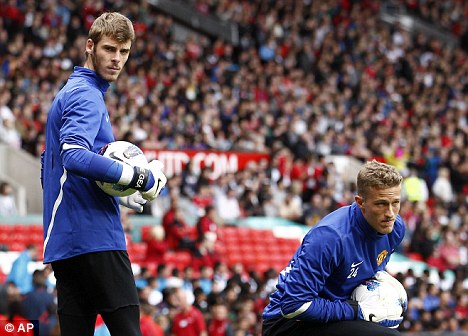 When Peter Schmeichel announced he was to leave Manchester United after the 1999 Champions League final, no United fan could have imagined it would take six years to find a replacement up to the task of taking the number one spot at Old Trafford. United were the most successful team on the planet, and had just completed the famous treble, every goalkeeper in the world should have been an option for Alex Ferguson.

Raimond Van Der Gouw was never really seen as United No.1, but an able No.2, but it was a strange choice to see Australian Mark Bosnich return to Old Trafford to become the new man between the sticks. Not that Bosnich did anything wrong, he picked up a few injuries, and when Van Der Gouw also picked up a knock, in came Massimo Taibi.

Looking back, what was surreal is that Taibi was always a very consistent performer in Italy, he made 177 appearances for Piacenza before making a move to AC Milan. When United came calling he was more than happy to make the move, and it looked as if Fergie had made a stellar signing when he picked up man of the match on his debut at Anfield after a couple of great saves.

But it all went wrong for Taibi against Southampton when an infamous goal from Matt Le Tissier was due to Taibi allowing the ball to trickle slowly through his legs. Things got worse, as United capitulated to a 5-0 defeat at the hands of Chelsea, and the media made Taibi the scapegoat.

United brought home the title, but with Bosnich clearly struggling with injuries, Sir Alex signed up Frenchman Fabien Barthez, another man with a proven track record. Barthez had won the Champions League, two domestic titles, as well as the World Cup and European Championships, it seemed as if United had finally found their man. He was sensational in his first season, the fans fell in love with eccentricity and he made some wonderful saves, including a well-loved penalty save at Elland Road. The only down point was in the FA Cup and included Paolo Di Canio, we all know what happened!

But in 2001 things went sour for Fabien, several mistakes against Deportivo cost United victory, before two errors in a crunch match against Arsenal finally got the media talking. He came back fighting though and is well remembered for a stunning save from Dietmar Hamann at the start of the 02/03 season, before playing his last game for United against Real Madrid, where he was criticized for his performance.

Over the next few years, Roy Carroll, Tim Howard & Ricardo all gave the No.1 spot a go, Carroll was erratic, Howard superb before going off the boil, and Ricardo never got going, barring a debut penalty save. Finally, United brought in Van Der Sar in 2005 and he kept the goal safe until 2011, when he announced his retirement. Van Der Sar was hard to criticise, making mistakes rarely during his six years at Old Trafford, but the media ever more willing to jump on the big teams, it was going to be big news when a replacement was signed.

I’m sure Fergie would have loved to replace him from within, Tomasz Kuszczak showed blemishes of good goalkeeping in his early days at Old Trafford, but never seemed confident, and Ben Foster looked the real deal on his debut against Derby. But the media pressure seemed to have an adverse effect on Foster at the start of the 2009 season, when Van Der Sar was out injured, a high-profile error in the Manchester derby, followed by another error against Sunderland saw Foster sold at the end of the season.

So it came to be that David De Gea was the man to take over from Edwin in the long-run, Anders Lindegaard was signed six months previous, but De Gea was the No.1. The media would have loved nothing more than the £18m man to make a howler on his debut against City, and they made the most of it by criticizing the Spaniard for both City goals, despite neither being massive errors. They were rubbing their hands when another error came on the opening day of the Premier League season, and despite making fine saves in games to game against Arsenal, Bolton, Stoke, Basel & Liverpool to name a few, the media once more jumped on De Gea after United Champion’s League exit, and after the 6-1 drubbing off City at Old Trafford.

Maybe it was the price that made De Gea such a target, Lindegaard had come in for peanuts compared to the Spain U21 goalie, and despite a couple of erratic performances from the Dane against City in the cup, and Newcastle in the league, the media seemed less interested in jumping on Lindegaard’s back.

So, are the media having an effect on United’s goalies, can the young ones such handle the pressure of being United’s No.1, Howard’s gone to Everton and been a solid buy, whilst Foster has provided some world class saves for both Birmingham and West Brom. It wouldn’t surprise me to see Kuszczak go and flourish elsewhere away from the spotlight. I personally think De Gea’s a good goalkeeper and can be world class for United, he’s shown glimpses of it, but goalkeeper’s at United, and other top clubs are going to have accept the media will batter them whatever they do.