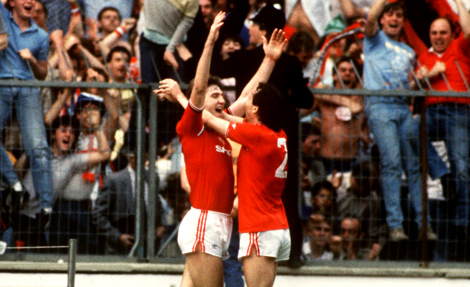 If asked about FA Cup memories involving Man United there is no doubt reds of a certain age will unanimously select most of the same matches! The Ryan Giggs semi v Arsenal, the Cantona final v Liverpool and the Whiteside Everton one of 1985 will all be there. Older fans than me will recall the 1977 final with great satisfaction, while those old enough to be my grandad will go back further to the 40’s and 50’s. I’ve selected 5 random games that may not be quite as obvious, but in reality it could have been many more. Not all the memories are great, and we all know that United have not prioritised the Cup as much in recent years, but it has been a long time since they won it, and some of these games might get you up for the game this weekend (as if you needed it!).

This was a classic United smash and grab! This United team was really coming to the end of their era of dominance but in games like this new signings Van Nistlerooy and Veron showed that the spirit was still there, and this game will live long in the memory for Red Devils everywhere. Villa Park has always been a ground with special appeal in the FA Cup, but at two down and with Peter Schmeichel in goal for Villa, it looked like being another of those bad days during that season. An opportunist Solskjaer goal and two great finish’s from Ruud snatched the victory very late, in front of the United fans in what seemed like a home game at the end! They eventually crashed out next round and more frustratingly lost a very winnable Champions League semi v Leverkusen, but this was a classic cup tie that had everything! And much of this team showed good spirit in coming back to win one more league title in 2003 aswell.

Why was this memorable? It wasn’t really and it was a woeful game. It was Liverpools first FA Cup victory over United in memory and it was notable for that famous injury to Alan Smith, which he struggled to recover from. United were very light in the middle and were deservedly beaten by a Crouch header, but it’s what followed in the next few months that was interesting. This was a very low point as a United fan coming soon after a Champions League group stage exit and Roy Keanes exit too. The post Glazers depression had not been lifted by new signings Evra and Vidic, both who had shaky starts to their careers at United.

Vidic was dominated that day, while Evra didn’t play, but I also sense that this was one of the games where Fergie began to decide that the likes of Ruud were not indispensable either. Whatever happened behind the scenes in the next few months is not fully known, but soon United were back in the title race playing a fluid style of football with Saha, Rooney and Ronaldo very much to the fore up top. A Carling Cup victory helped buy time and confidence, the signing of Carrick the following summer gave United stability in the middle and within a year or so United were a force both domestically and in Europe once again. Liverpool won the FA Cup and added to an unlikely Champions League win the previous year to leave them in bullish form, but have been pretty much in decline since and remain without a trophy as I write. Let’s hope the early CL exit for United is not an omen for this tie on Saturday though.

Since the unfortunate loss to Arsenal on penalties Arsenal have beaten United many times, but i’ve always felt that in the matches where it really mattered, United were stronger. The CL semi’s of 2009 are the obvious example, but United had a great league victory over Arsenal in Old Trafford in the 2008 season too, and most of the losses have come at stages in the season where it was either too early or too late for Arsenal to damage these title hopes.

By 2008, the FA Cup was certainly not a priority for either team, and this is reflected in the teams that day, with Ronaldo, Adebayor, Flamini and Giggs all on the bench. Uniteds squad was far stronger though and they tore Arsenal apart. Eboue was sent off as the myth of Arsenal being the greater football playing team was again exposed, with the Londoners reduced to kicking the likes of Nani around the park by the end of the game. Nani, Rooney and Fletcher all marked top class displays with goals, and it could have been a lot more. A wonderful highlight of a season which could easily have been another Treble winning one, if it were not for a terrible display of referring in the Portsmouth game that followed. But this was great.

I can’t remember anything other than THAT goal by Mark Hughes. But what a memory. If we are to be totally honest Man United rode their luck at times over two semi finals with Oldham in 1990 and 1994 and the relief  of getting a replay out of this was immense as it again looked like being “one of those days”. The 1990 one was no doubt more important, but that great Hughes equaliser in 94 provided us with the one of the greatest FA Cup memories we will ever experience. It says a lot that it took goals like the Ryan Giggs Villa Park winner to surpass it, but it was also an iconic moment for reds everywhere!

There was no way I was gonna use Uniteds only FA Cup loss v Liverpool as the only memory of their clashes! These two ties were amazing, the standard of football and atmosphere were up there with the Arsenal double header of 99, and again, like that year, United were unfortunate to be engaging in a replay. Like Arsenal in 99, Liverpool were a great team, but what followed in Maine Road remains the highlight of my young life in the 80’s! Robson and a young Hughes got great goals after a Paul McGrath OG looked like giving Liverpool a clear path to the final. Amazing! And just re-watching it on youtube brought me back to another great smash and grab; the 2-1 win over Liverpool in 1999, which foretold the CL final in May………..but I better stop now, we could be here all night!