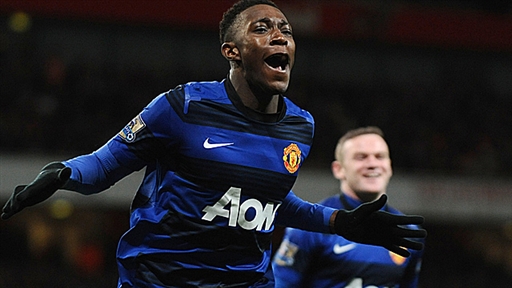 The earlier kick off between Manchester City and Tottenham Hotspur saw City take a late three points, and increase their lead at the top of the table to six points. After this result, there was nothing but a win needed for United to ensure we were still in the title race.

Going into this game, there was one thing on every Gunner’s mind; the 8-2 thrashing they received on their visit to Old Trafford earlier on this season. Arsene Wenger has this week spoken about how it took him twenty-four hours to bring himself to watch the game back, and he spoke of the embarrassment he felt as a manager after it.

With this, United were not expecting an easy ride at The Emirates, as Arsenal had only lost at home once this season, and were looking to bounce back after their defeat away to Swansea last week, and seek revenge after the previous meeting between the two teams.

The game began quietly; with the scoring opening late into the first half’s injury-time, after a cross from United veteran Ryan Giggs found Antonio Valencia in the box, who headed the ball home to make it 1-0, giving Giggs the best minutes per assist rate (95 minutes) in the Premier League this season, showing why Sir Alex continues to pick him week after week.

Although there wasn’t much action in the first half, for the better part of it, United found themselves the better team. An injury to Phil Jones forced him to leave the game early in the seventeenth minute; introducing new injury scares into United’s camp, which was not what the Red Devils needed, considering our struggles so far this season.

Deservedly, United went into the dressing room with an advantage after the break, but the home side came back out the feistier team, and Robin Van Persie levelled the score, from a through-ball from Gunners’ youngster Alex Oxlade-Chamberlain in the 71st minute.

Arsenal had a good start to the second half, with Van Persie earlier missing a sitter inside the box, after a Chris Smalling error handed Tomas Rosicky the ball, who found his captain in the box, but Van Persie failed to convert the chance.

Although Arsenal welcomed Thomas Vermalen back from injury, there were clear gaps in the Londoner’s defense, seen when Danny Welbeck was allowed to race away from Per Mertesacker to take a shot, but the German defender managed to clear it off of Szczesny’s line, preventing the visitors’ attempts at getting a winning goal.

The game then saw Arsene Wenger make a controversial decision to replace one of Arsenal’s star men of the afternoon; Oxlade-Chamberlain with an off-form Andre Arshavin.

The Gunners looked set to try and fend off United’s earlier lead, as they were creating a lot more chances than The Reds, but fourteen minutes after Welbeck’s break saw an on-form Antonio Valencia beat four Gunners inside of the box, including Arshavin, who looked sloppy, and failed to clear the ball from the box, allowing Valencia to set-up Danny Welbeck for his 9th goal of the season. The Mancunian found the top right corner of the home side’s net, securing the three-points for The Reds.

Nani and Wayne Rooney joined Phil Jones on the list of injury scares, with Nani being taken off for Paul Scholes, and Rooney limping off the pitch after the final whistle. Further reports claim that there is also a hamstring problem for United’s man of the moment, Michael Carrick.

Although United headed home with further injury scares, a deserved win saw us tighten the gap on City, with there now being three points between the two Manchester clubs.

Arsenal’s Oxlade-Chamberlain made a positive impact on his first appearance in the Gunner’s Premier League starting line-up, setting up Van Persie’s goal, as well as creating chances for the home side, but this wasn’t enough, as Arsenal now face their third Premier League defeat in a row for the first time in five years, and have today found themselves struggling to fight for fourth place competition from their London rivals Tottenham and Chelsea.

United now remain hot on the heels of Manchester City thanks to a 2-1 win, even though they’d suffered two losses in their last three Premier League games, a win down south was vital, and both the players and the manager will be pleased to travel back up north with three points in the bag.