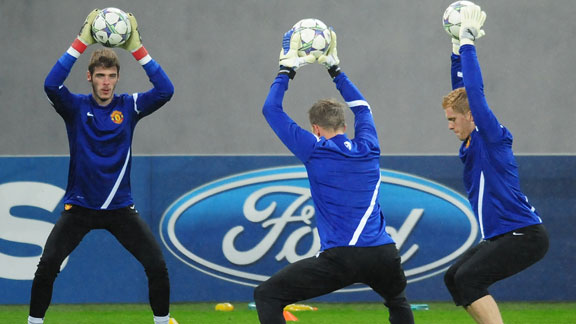 Anders Lindegaard reckons David de Gea will fulfill his potential and become Manchester United’s first-choice goalkeeper, but made it clear that his team-mate may need to wait patiently for another opportunity.

David de Gea, aged 21-years-old, signed for United from Athletico Madrid last summer in a deal estimated to have been worth £18million but has been questioned a number of times by the British media due to a couple of blunders. Most recent coming at the end of December when he failed to clear a cross which resulted as a winner for Blackburn Rovers.

Since then, Lindegaard has started consecutively keeping seven clean sheets in eight Premier League games. However, he’s made his fair share of errors so it’s not exactly a spotless slate. The 27-year-old is also expected to start against Arsenal this weekend but has predicted his fight for first-choice will only make him more determined to prove himself at the highest stage.

“David has extraordinary attributes, he is extremely explosive and powerful,” Lindegaard said in an interview with the Telegraph. “He is only 21, but his potential is massive and there is no doubt he will be United’s best goalkeeper at some point.

“My job is to make sure it is not until I have retired, which is about 10 years away! Of course, everyone wants to play as much as possible and I’m no different, so I don’t need a definition of my position [as first-choice].”

Picking up a suitable successor to Edwin van der Sar was never going to be an easy test – similar to replacing Peter Schmeichel, which took around six years. And I am not suggesting that history will repeat itself. I firmly believe in both of our goalkeepers but it’s important that Ferguson stops switching frequently or else we will end up in the same situation as Roy Carroll and Tim Howard.

While the Danish goalkeeper is working hard to keep the No.1 slot his own, he admits to helping David de Gea at the same time.

“It has been very good for both of us. Every time we play, the last guy to wish the keeper good luck is the other keeper. We have a very good relationship and I enjoy working with him.

“But it says a lot for me that I am keeping him out of the team and I am very proud of what I have made out of this. Three years ago, I was in Denmark’s second division and nobody knew my name. When I first came here, nobody could pronounce it

“It has been fantastic to this point and right now is not the time to relax but to keep pushing on, to get better and to get the best for yourself and the club.”