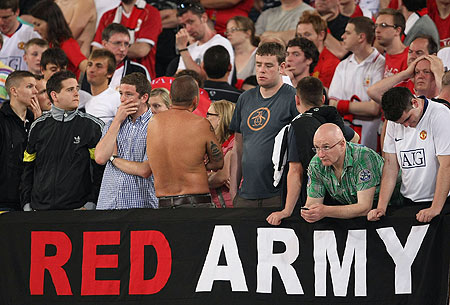 As a United fan, an injury crisis is expected, as it isn’t a United season, without something not going to plan…

The ‘United Way’, has always been to call on our youth squad before going anywhere else, when we are having trouble with our starting eleven.

This dates right back to Jimmy Murphy famously doing this after the tragedy that struck the club with the Munich Air Disaster on the 6th February in 1958, brutally taking away eight of the club’s very talented young players, forcing Murphy to look to United’s youth team, and create a team in Matt Busby’s absence.

Although in previous years, there’s been injury problems, in recent years; we haven’t struggled as severely as we are this year. We currently have 7 first team players out injured, including Darren Fletcher and captain Nemanja Vidic, who have been ruled out for the rest of the season. Those seven have been cut from, at one point an eleven-man list of injured players.

During the Boxing Day clash with Wigan, United were forced to place Michael Carrick and Patrice Evra in a centre-back position, Antonio Valencia at full-back and Wayne Rooney dropped back into a central midfield position.

Sound familiar? In 2009, Sir Alex found himself struggling to find a back four, after injuries to Gary Neville and Wes Brown against West Ham caused The Reds to place Carrick and Evra at centre-back, with Ryan Giggs playing as a full-back for the rest of the game. Carrick then started as a centre-back along with Darron Gibson for the Wolfsburg game the following week

Michael Carrick has taken up the role in defense on more than one occasion this season, and has rarely looked out of place while doing so. Many fans have spoken of the lack of central midfielders playing in midfield this season, as they’ve had to drop back and play a defensive game.

This isn’t the first season that we’ve had problems with defensive injuries, in December 2009, we found ourselves with similar injuries, with Neville, Vidic, and Ferdinand being among the ten players that were sat injured in the stands.

That year, Chelsea took the Premier League trophy, with United finishing second, a point below them. When comparing 2009 with this season, United are on much better form, with a point more than the same time in 2009, and one less game played.

Fergie isn’t a newcomer to fighting his way out of an injury crisis, in November 1992, he found himself in need of a striker, with new signing Dion Dublin out for 6 months with a broken leg, and both Brian McClair and Mark Hughes off-form.

Sir Alex famously interrupted a call regarding Denis Irwin between United chairman Martin Edwards and Leeds chairman Bill Fotherby. Fergie and Edwards decided Denis Irwin was not for sale, and had signed Eric Cantona for £1.2m by the end of the phone call.

Although United had been struggling in 1992, finding themselves in 8th position before Cantona’s signing, we went on to win the league by a clear 10 points, arguably because of Cantona’s influence in the team.

This season’s injury crisis has found Fergie looking into our youth team, with Ezekiel Fryers, Will Keane, Paul Pogba and Ravel Morrison seen on the first team bench in recent months, with Fryers impressing in his senior debut in the Carling Cup against Leeds, playing centre-back along side Michael Carrick.

Most of our injury problems are set to be fixed by the second week in February, and United will find themselves fighting some tough opposition, and beginning their campaign in the Europa League.

Sir Alex is the most decorated manager that the English League has ever seen for a reason, and although, at the same stage in 2009 United found themselves second in the table to Chelsea, Chelsea weren’t our ‘noisy neighbours’, The Boss recently joked “I’ll have to aim for 91, then” when asked about City boss, Roberto Mancini’s aim for 90 points to win the league.

With our biggest rivals this year being Manchester City, Fergie seems a lot more determined to win the league, as it is now a battle of two halves of the city, as well as the league title.