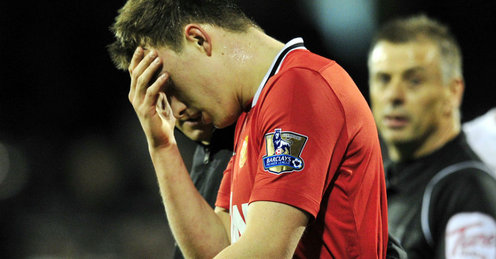 Manchester United hope Phil Jones can recover rapidly from a new injury in order to help battle with City for the Premier League title despite sending him for an x-ray Thursday morning thinking he had broken a cheekbone while representing the reds last night in the 5-0 win over Fulham.

The English international was replaced just after 20 minutes by Ashley Young. Jones took an elbow to the face from Clint Dempsey while jumping up to contend for a ball in mid-air, early on. The collision led to fears that he could miss up to six weeks of football but thankfully Jones has only suffered bruising and slight concussion.

When asked about his time-mate, Ryan Giggs said Phil Jones appeared ‘groggy’ after the incident. And Hernandez’ head injury earlier this season would have frightened our medical staff, so I’m sure the club don’t have any intention whatsoever on rushing the 19-year-old back with the risk of losing him for even longer. There’s also a slight chance that we will see him feature on Boxing Day against Wigan but I very much doubt that will happen.

Fergie will give his weekly press conference Friday morning and is expected to talk about Jones’ current situation, giving the media more information. Plus with the absence of Darren Fletcher, Tom Cleverley and Anderson in midfield, we seriously need someone to cover that particular position. Phil Jones has done that ever so well in recent weeks.