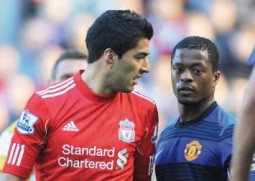 Luis Suarez has finally been found guilty of a racist action towards Patrice Evra in October’s match at Anfield. The Uruguayan now faces an eight match suspension along with a fine worth £40,000.

Suarez attempted to defend his alleged racist comments to Evra, with the backing of his manager Kenny Dalglish and the club itself, but the FA have charged the striker. However, Liverpool have 14 days to appeal against the decision.

Official statement from the FA

An Independent Regulatory Commission has today [Tuesday 20 December 2011] found a charge of misconduct against Luis Suarez proven, and have issued a suspension for a period of eight matches as well as fining him £40,000, pending appeal.

On 16 November 2011, The Football Association charged Luis Suarez with misconduct contrary to FA Rule E3 in relation to the Liverpool FC versus Manchester United FC fixture on 15 October 2011.

A hearing took place from 14-20 December 2011 before an Independent Regulatory Commission of The FA to consider the charge.

The Independent Regulatory Commission announced its decision on 20 December 2011, which is as follows:

The Independent Regulatory Commission will provide written reasons for its decision in due course setting out:

Mr Suarez has the right to appeal the decision of the Independent Regulatory Commission to an Appeal Board. An appeal must be lodged within 14 days of the date of the written reasons for the decision.

The penalty is suspended until after the outcome of any appeal, or the time for appealing expires, or should Mr Suarez decide not to appeal. The reason for this is to ensure that the penalty does not take effect before any appeal so that Mr Suarez has an effective right of appeal.

While I think the ban isn’t long enough or the fine isn’t as high as it should be, I do believe some sort of justice has been served. You must give it to the FA for throwing the book at Suarez and setting an example of him, but eyes will now move towards John Terry who was caught on camera using vulgar language towards QPR defender Anton Ferdinand.

In response to this, Liverpool released a scandalous statement on the club’s official website. I can’t help but wonder if the FA will act against the club again, for releasing something pathetic and untrue.

2 responses to “Eight match ban for a guilty Luis Suarez”